Maybe I expected too much, but The Final Girls is a major disappointment. As a lover of both 1980s slasher movies and some thoughtful meta deconstruction from time-to-time, I was primed to enjoy this brand new slice of homage, especially after hearing so much praise for it — as well as an engaging interview with director Todd Strauss-Schulson — on the podcasts I listen to. But, it missed every single mark it aimed for, and by such a margin I had to wonder if the filmmakers even knew what the target looked like.

Taissa Farmiga stars a Max, the teen daughter of an actress (Malin Akerman) whose career peaked 20 years earlier as a minor scream queen in movies like "Chopping Mall," "Co-Ed Massacre" and the slasher "Camp Bloodbath." Even though mom is a sad flake, they have a special bond, and her death in a car accident apparently leaves Max with unresolved (but very vague) mommy issues. Three years later, at a special screening of "Camp Bloodbath," Max and four of her friends are inexplicably pulled into the movie and decide that the only way out is to manipulate the rules of the slasher sub-genre and kill the masked murderer, Billy.

The Final Girls sounds like it could be a lot of fun, but to do so would require a familiarity with real slasher movies, a skill at recreating the look and feel of a very particular medium, a consistent point-of-view, and some kind of narrative plan that makes the least bit of sense and follows through to a conclusion. It has none of these. It feels like an homage to a guess of what '80s slasher movies were like from someone who has only seen bad parodies of the already self-conscious slashers of the late 1990s; it is aesthetically incoherent, attempting to pass off its own overproduced style as a tone-deaf tribute; it switches randomly from broad, dumb spoof to straight horror to earnest sentimentality without providing a framework in which any one approach is comprehensible or gratifying let alone complementary to the others; none of the set-ups payoff; and none of the pay-offs are set-up.

Even though I came into The Final Girls already liking Farmiga, Akerman and co-stars Thomas Middleditch and Alia Shawkat from their TV roles, I was quickly put off by the artificial on-the-nose writing that stripped their characters of real personalities. the mother-daughter relationship at one of the movie's many conflicting cores is initially too adoring of immature parenting to earn the later pay-off of the ultimate motherly sacrifice, if that's even what it was going for. That family drama portion — which I thought was the movie's main focus, until the further dispiriting twist ending — is all emotional gestures and no substantial drama. Middleditch has an appealing comic personality, briefly providing the only laughs in a movie that is ostensibly a comedy. the rest of the "laughs," the unfunny ones, come from the broadly artificial "Camp Bloodbath" universe, which resembles none of the actual movies it purports to celebrate. Adam DeVine and Angela Trimbur join Akerman as the movie-within's fictional characters, but they play their roles too loudly, as if they are in a skit sending up bad beach comedies.

Visually, instead of attempting to lovingly recreate the style of the '80s slasher, Strauss-Schulson incongruously takes his inspiration from The Wizard of Oz, making this alternate dimension so brightly colored and conspicuously art-directed it only works as a parody of tone-deaf film students in love with their palettes. There is one sequence around the hour mark in The Final Girls that effectively evokes the slasher medium, but it is still unable to work within style of the era the movie imposes on itself. Instead there is a succession of wildly overproduced vistas (augmented by egregiously fake CGI effects, some of the worst I've seen recently) and aggressively lit sets that often look very nice but which are totally at odds with the context. I suspect this is because Strauss-Schulson is essentially uninterested in his own concept and simply forgot about it for a while.

After first establishing the conceit that their characters are stuck in an old horror movie, Strauss-Schulson and writers M.A. Fortin and Joshua John Miller (the latter of whom was actually in 1980s horror movies as a child actor) spend the next half-hour completely ignoring it, with Billy reduced to lamely peeking in one window during a half-hour stretch devoted to Max sweetly bonding with her mom's movie character. However, The Final Girls then manically switches back to the horror gimmick for a climactic confrontation that, neutered by inattention, is shot like a bad imitation of Zack Snyder's overcooked vision. the coda of The Final Girls reveals an even deeper level of thematic confusion — as well as the depressing promise of a sequel — as if throwing a quantity of ideas at the audience will mask the lack of effort put into adequately realizing any of them.

I loved the meta exploration of horror tropes in Cabin in the Woods — and liked the lesser but fun Scream and Tucker and Dale vs. Evil — which all focused on and explored their points of interest with great affection. The Final Girls thinks it does the same just by rattling off a few tropes, like a 5-year-old who has memorized 10 state capitals, but still gets 3 of them wrong. 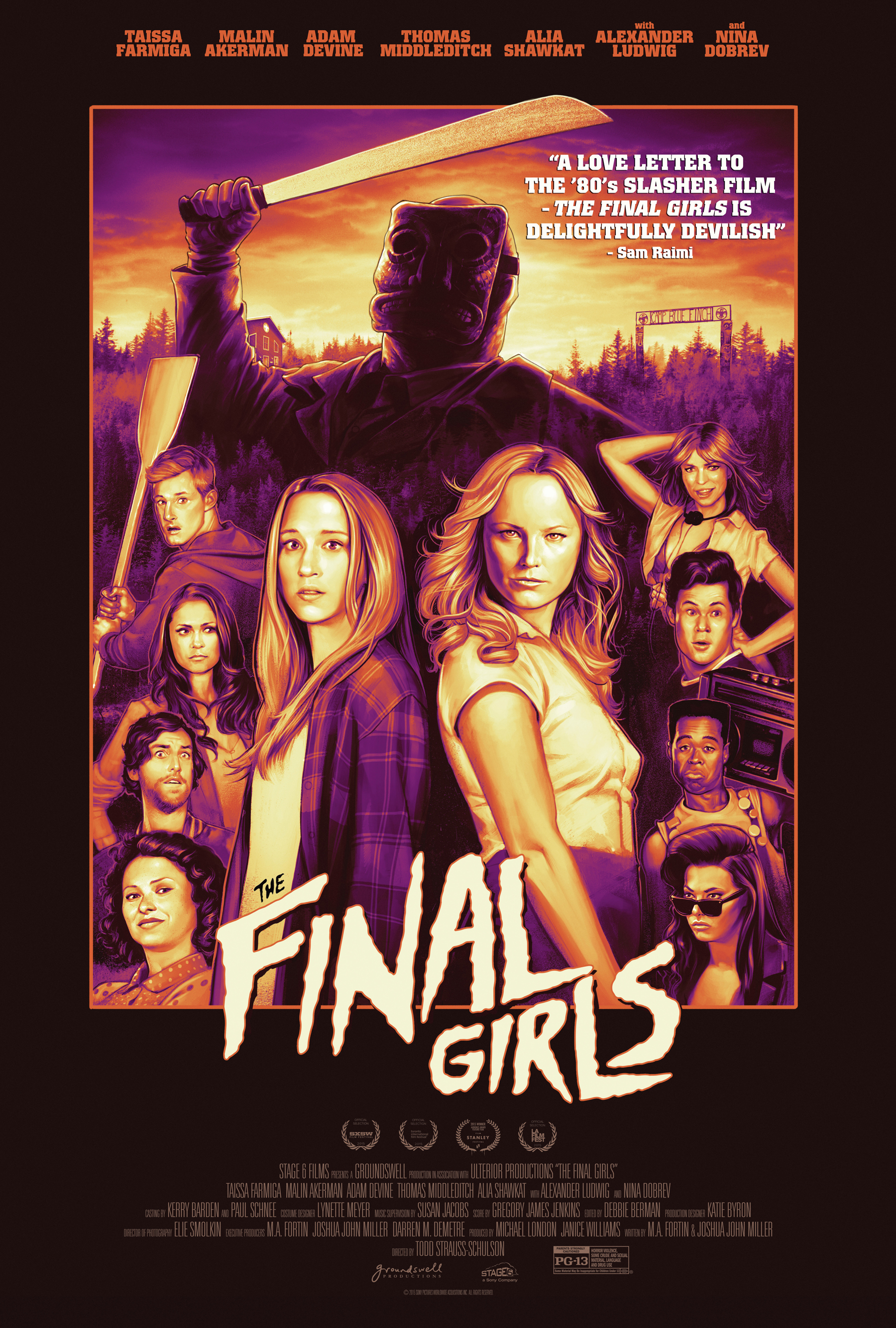 Octoblur: If the quality doesn't scare you the quantity will.
More about The Final Girls (2015) on Videopolis