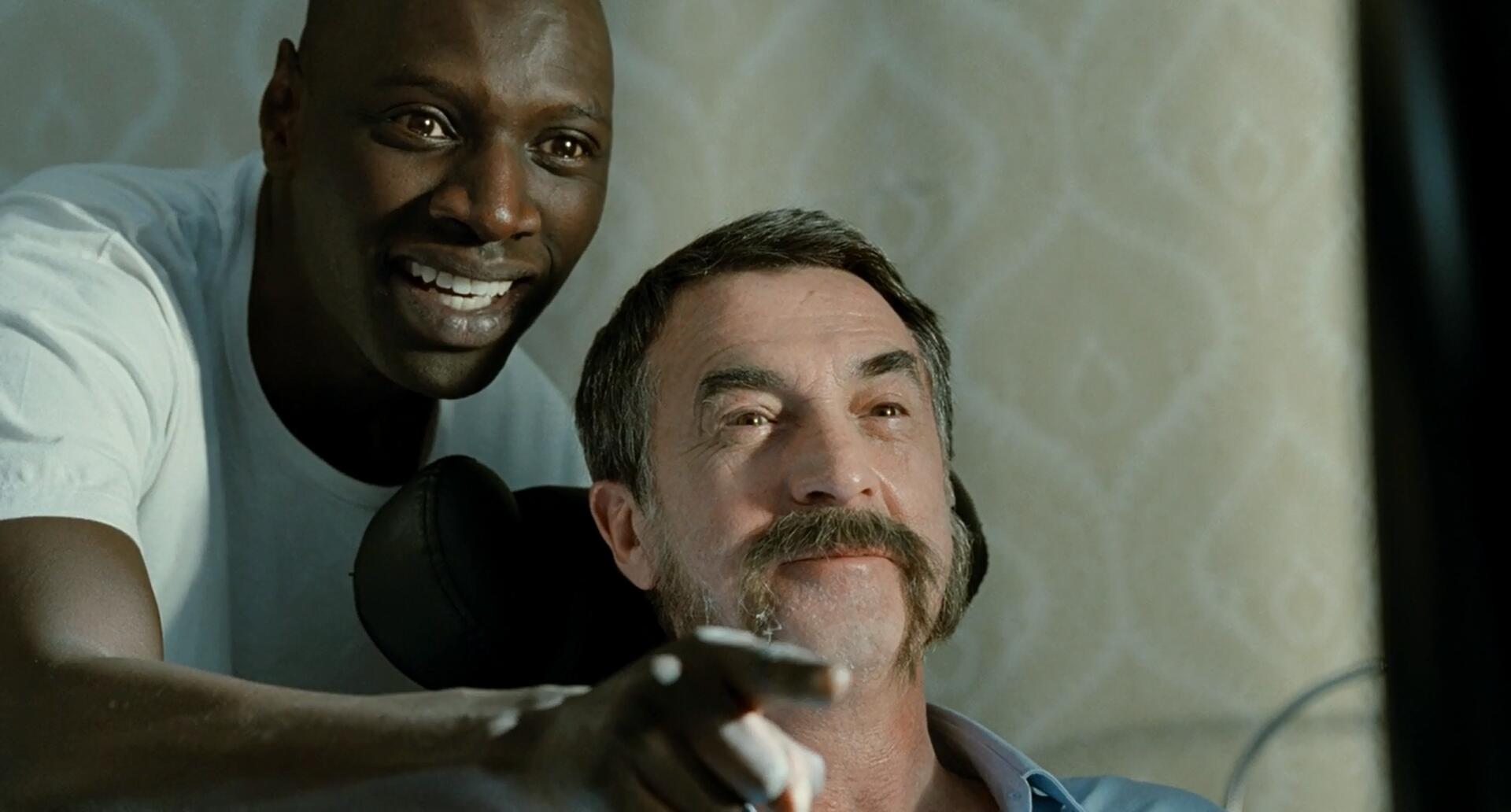 This is my problem with these crowd-sourced lists. They sometimes allow populist sentiment to elevate lesser movies above far more worthy ones. We saw this happen earlier this month with the incredibly dumb Warrior (2011), which was essentially Frozen for men, but with punching instead of singing. the French comedy/drama Intouchables is a far better movie than Warrior, but at the time of this writing it is currently ranked on IMDb as the 39th best movie of all time, ahead of Apocalypse Now, Dr. Strangelove, Back to the Future, Alien, The Shining, Citizen Kane, Vertigo, A Clockwork Orange, Taxi Driver, Singin' in the Rain, and 2001: A Space Odyssey, just to name a few. What is wrong with people?

Intouchables tells the glossy, genial story of Driss (Omar Sy) and (Philippe) François Cluzet, who are the opposites movies are always telling us make the unlikelist but bestest of friends. Driss is an African ex-con gaming the Paris welfare system to avoid violating his parole. Phillippe is a cultured millionaire paralyzed from the neck down. Phillippe hires Driss as his new caretaker, even though Driss has no qualifications. One is poor, one is rich. One is black, one is white. One is young, one is old. One is vulgar, one is introverted. Oh, just hug already!

Intouchables is not as bad as it should be. In fact, it's pretty good, and quite funny at times. Writing/directing team Olivier Nakache & Eric Toledano wisely avoid many of the most perilous movie-of-the-week tropes. There are none of the dreadful tearjerking tragedies that seem inevitable to this kind of story, and there are some nice twists to other mainstays of the genre. Phillippe is not curmudgeonly or self-pitying, but pretty likable right from the start. Although Driss has just been released from a six-month prison sentence, his criminal background never awkwardly injects itself into his new life. There are several other narrative opportunities for cliched or treacly turns, but Nakache & Toledano have the volume turned way down on manufactured plot points, which is a relief.

However, at the very core of this feel-good favorite is a deeply artificial movie innocence that candy-coats too much of its plot and characters. You can tell by the movie's saccharine poster, of the two men smiling directly at the viewer, that it aspires primarily to cheap sentiment and anything greater is a small bonus. Omar Sy is a wonderful screen presence with amazing charm and the brightest smile imaginable, making Driss' rough backstory completely incongruous. Phillipe takes to him immediately, without reservation, and the conflicts that arise as a result of their differences are almost minimal. Driss initially objects to some his more intimate duties, but gets over those objections immediately (at least we never hear of them again). They are played for laughs and then disappear. Phillippe's teen daughter has emotional problems, but only for a minute. Phillipe's staff are suspicious of Driss, but then they love him, just like that.

I know this is based on a true story, but no true stories are this relentlessly cute and constantly courting conflicts that never materialize. The relationship between the two main characters is endearing but never real, it's an idealized version of something that was either more interesting in real life or too dull to warrant a movie, and it never finds a meaningful solution to that paradox. Intouchables is a movie without a theme, devoid of meaning, that presents one-dimensional characters in a false relationship going through arbitrary motions. That is does all this very sweetly makes for an agreeable and sometimes heart-warming couple of hours, but real human emotions are never within its neutured scope. 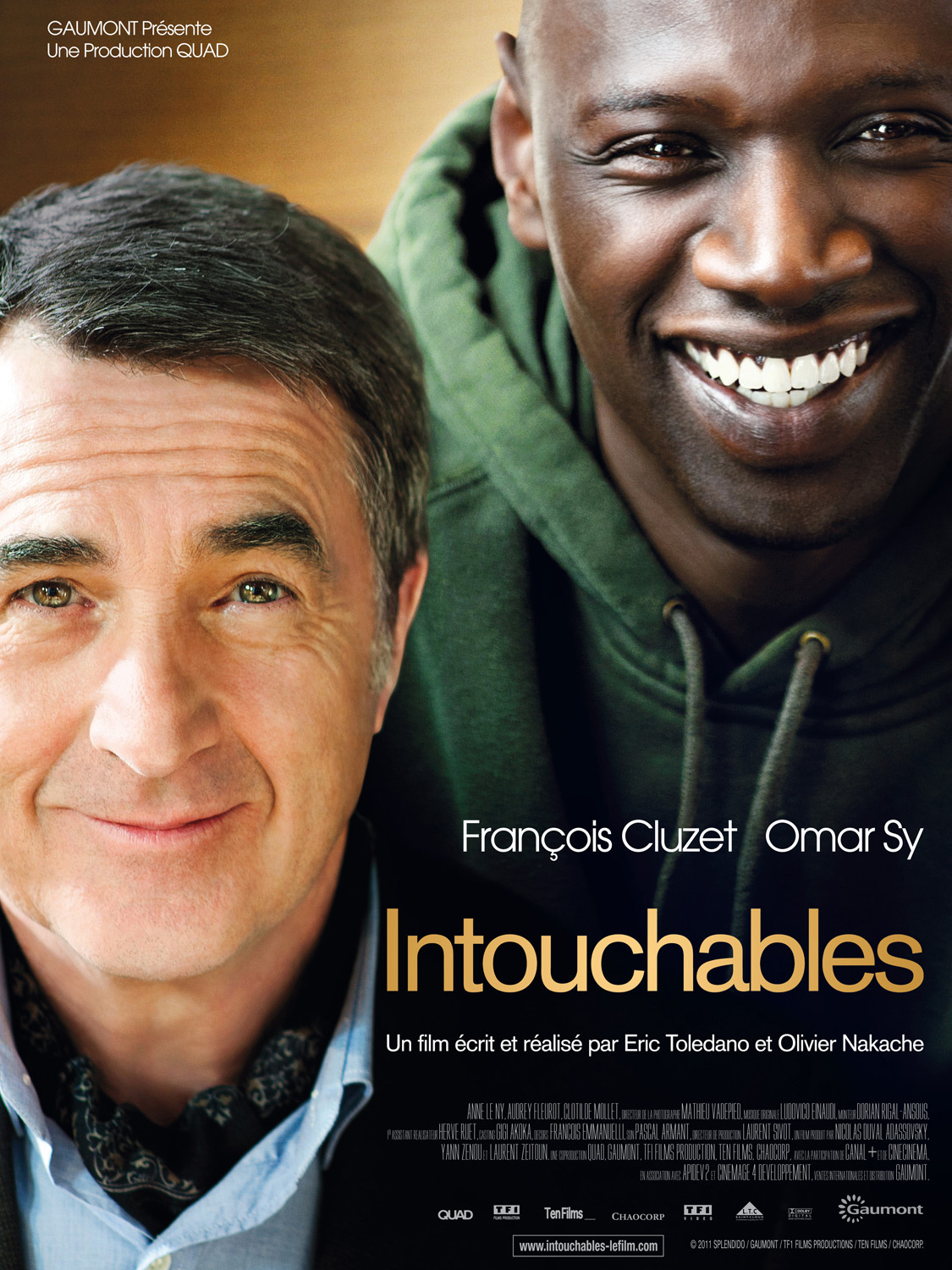