There've been a few movies in this month's PopGap that I didn't much care for, but I can still sort of understand why they are so highly rated. the popularity of the MMA/family drama Warrior, however, is pretty baffling. I can see how something like this can be considered a guilty pleasure by a vocal minority — and I was even thinking during the first 45 minutes that it was going to be fairly decent (I was wrong) — but Flickchart users have this ranked as the 2nd best movie of 2011 and 26th overall since 2010. Almost 260k IMDb users have rated Warrior at a remarkable 8.2 and it ranks inside their Top 250 Movies of All Time! Was there a concerted effort by some band of Internet hooligans to artificially inflate the scores for this sentimentally overcooked paper-chain of implausible plot devices and cliches? Or do people really, authentically LOVE this maddening, superficial movie? Is it like how I love Purple Rain — I know it's atrocious but love the concert scenes? Or is it Beaches for dudes: such an effective pusher of masculine buttons that it overloads critical circuits leaving all the most sensitive wires exposed?

I shouldn't be surprised. One of the Internet's favorite movies is The Shawshank Redemption, which I've seen only once, during the first week of it's theatrical run in 1995. I walked out thinking that it was a well-produced but very mediocre and sentimental rehash of every prison movie cliche known to man. I didn't think much about it after that, until years later when it surprisingly began emerging as a leading contender in nearly every crowd-sourced movie ranking website. When Shawshank writer/director Frank Darabont launched the celebrated TV series The Walking Dead, I was initially surprised by the high praise: it seemed to me merely a well-produced but very sentimental and mediocre rehash of every zombie movie cliche known to man. I was discovering a trend. the trick that Darabont pulled, which is the same trick Steve McQueen employed during Shame, and Gavin O'Connor has pulled in Warrior, is that if a director can accurately ape the aesthetics of great dramas — long quiet takes with austere cinematography punctuated by showy bursts of methody acting by solid actors — they can pass off pretty empty and sometimes even terrible tripe as top-class cinema.

The extremely dumb, manipulative and implausible plot of Warrior is, briefly: two estranged brothers with lots of personal problems and an alcoholic father effortlessly eke their way into an elite, big-money Mixed Martial Arts tournament where, you would never guess, against all odds they face each other in the final match.

First, let's say some good things about Warrior. the acting is terrific, especially considering how horribly one-dimensional all the characters are. Tom Hardy is an amazing actor. I haven't even seen him in all that much yet, but going only from this, The Dark Knight Rises and his amazing performance in last year's Locke, he shows more range and magnetism in three movies than most actors do in an entire career. Hardy starts Warrior in extremely good form; sadly his one-note mopey rage-filled AWOL-Marine with a grudge gets dull pretty quickly. Joel Edgerton, as Hardy's brother, a former UFC fighter-turned physics teacher in financial trouble, is good and circumstantially empathetic. the great performance in Warrior, however, is from Nick Nolte, as their 3-years-sober father, who fills the movie with life in every one of his scenes; at least until his inevitable and embarrassingly overwrought fall off the wagon during the movie's climax. I miss seeing Nolte in more movies. He is truly great.

That's it. the rest of Warrior is terrible. the plot veers from stock fight-movie tropes to wild implausibilities that are justified only by the screenplay's template. With an hour left I wanted the horrible, forced melodrama to end and the fighting to start; once the fighting started I was so dispirited by the obviousness of where it was headed that none of the fights scenes had any tension. Reading reviews on IMDb, I am shocked that anyone was in suspense over which brother would win, as O'Connor clearly marked one as the underdog and the other as a brutal punching robot. This movie was clearly not interested in surprising twists on tired formulas. In fact, its last hour is so relentless in its pursuit of mounting emotional manipulations upon cliches upon punches, that it commits the cinema equivalent of auto-erotic asphyxiation, tightening the belt of tropes around its neck tigher and tighter until it releases upon a finale that combines every worst-case ending scenario I could imagine.

If it weren't for Nolte and, to a lesser degree, Hardy, Warrior would be a completely worthless experience. 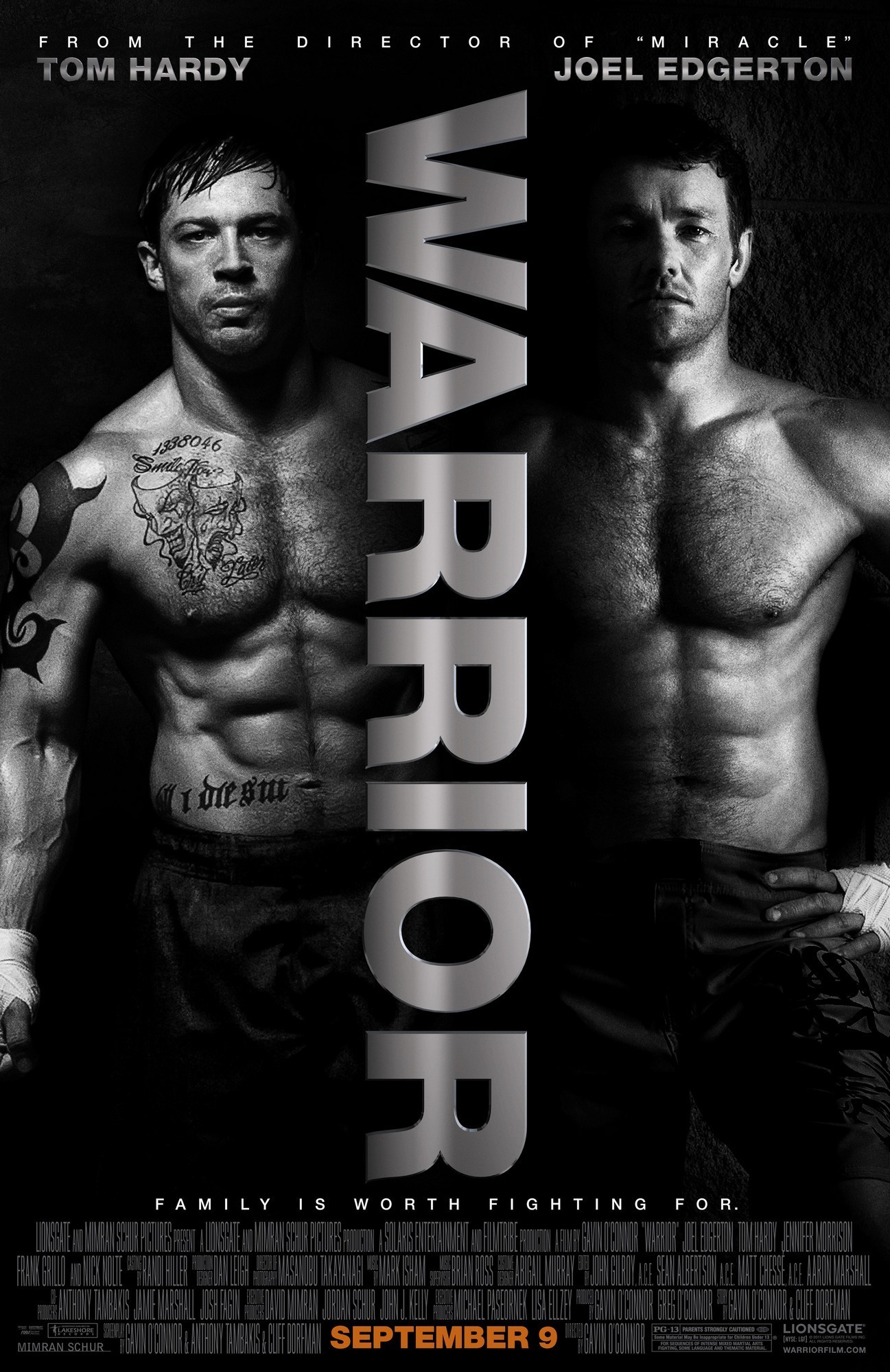