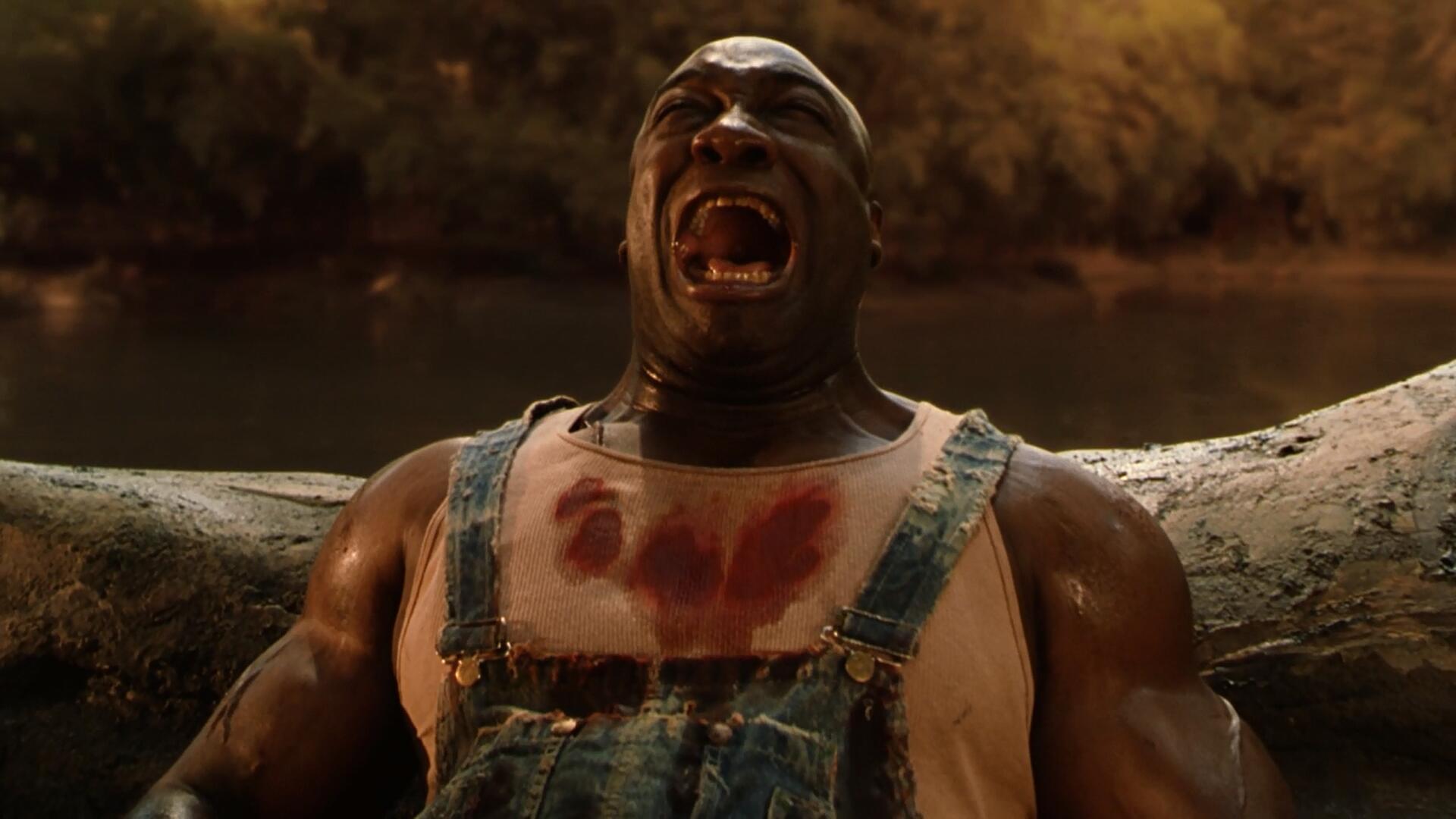 I'm adding The Green Mile to my list of stupid movies that are considered great because they make tough guys cry. I didn't want to watch this prison-set Stephen King adaptation by writer/director Frank Darabont because I wasn't crazy about The Shawshank Redemption, which was about similar subject matter from the same creatives. PopGap made me watch this movie. I hated this movie.

The Green Mile is a shamelessly manipulative giant steaming pile of cheap sentiment, cardboard sainthood, & cartoon villainy with astoundingly high scores on every movie rating website. Throw in one of the most egregious "magic negros" in movie history and stretch it out to over 3 hours, and you have an utterly loathsome movie that somehow has almost no negative reviews at IMDb.

I'm too disgusted with this garbage to write anymore about it. Here's my Twitter stream while watching it:

Started watching #GreenMile earlier today for #Popgap Following are my thoughts on 1st 75 (of 188) minutes. I'll resume the movie in a few.
Watching #GreenMile for #PopGap Not crazy about prison movies & have low opinion of Darabont's body of work. Been dreading 3 hrs of both.
Thought #Shawshank was handsome collection of cliches smothered in easy sentiment. If #GreenMile is more of same, this won't be fun.
If #GreenMile turns out that MCD is innocent & coerced into or misunderstood confession it will confirm my worst Darabont suspicions.
Darabont takes facile stories w/thin characters, drags them out w/serious actors & nice visuals, & passes off as "art" #GreenMile.
Should blame King for 1-dimensional nasty guard in #GreenMile but Darabont seems to bring out worst of his more insipid characters.
Great actors like Hanks, Morse, Cromwell make a cartoony performance like Hutchinson's as cruel Percy even more annoying #GreenMile.
There's such an air of obviousness to #GreenMile It astounds me it is so well-loved. 8.5 on @imdb? I like movies to surprise me.
#GreenMile is TV movie/soap opera level content with big movie production values. Is it really taking 3hrs to retread old tropes?
Ugh. So MCD is psychic & his "tried to stop it" confession was misunderstood as guilt? Supernatural spin, same old junk. #GreenMile.
OK, so *that scene* surprised me, but it did was reinforce the cartoony one-dimensionality of the plot and characters in #GreenMile.
I can add #GreenMile to the dubious list of movies in which mentally disabled/homeless people are magic/wise/better than rest of us.
Turns out there's special term for it when it condescendingly involves race: http://en.wikipedia.org/wiki/Magical_Negro … #GreenMile.
To be fair, #FannyAndAlexander -- which I loved -- had some of this, which I also found a little irksome: http://www.urbandictionary.com/define.php?term=Magical+Jew …
Great. Rarely do I see Gary Sinise pop up in a troubled movie and say, "Oh, this is about to get less annoying!"
OK, that catches up my thoughts during 1st hour+ of #GreenMile Let's slog through the rest so I can cross it off this month's #Popgap list
Weird. That's Mr. Noodle as one of the death row convicts in #GreenMile
#GreenMile sets up easy targets & knocks them down w/overblown sentimentality, as if some great feat was accomplished. Gets boring.
Darabont would never be so obvious as to have thunder/lightning storm during execution scene in #GreenMile.
Obvious from start of #GreenMile that Coffey's innocent & from 1hr mark that he was trying heal dead girls. Painful waiting it out.
Finally the overblown revelation of what was painfully obvious 2.5 hrs earlier #GreenMile.
Even the few ironies #GreenMile allows itself are overly simplistic and reductive. "He a bad man" is the deepest level of complexity.
I think Michael Clarke Duncan might be about to break out into a verse of "Ol' Man River" in a few seconds... #GreenMile.
#GreenMile is 1 of most shamelessly manipulative movies ever made. It's pretty disgusting; I should hate it much more than I do.
Actually in suspense over how awful last 10 mins of #GreenMile will be. Will he die realistically or in a burst of angelic light?
A rare tactful scene in #GreenMile Was afraid of some hyper-magical finale of wonder.
Are they actually EXPLAINING this ending? WE GET IT! For god's sake #GreenMile is aimed at 8 year olds. Now I hate it as it deserves.
#DeadManWalking should spit in the face of #GreenMile like the victims' families often do in these types of movies. Disgraceful.
Hanks, Duncan, Morse were very good in #GreenMile Better than it deserved. Darabont stages scenes well, also. But it's pure tripe. 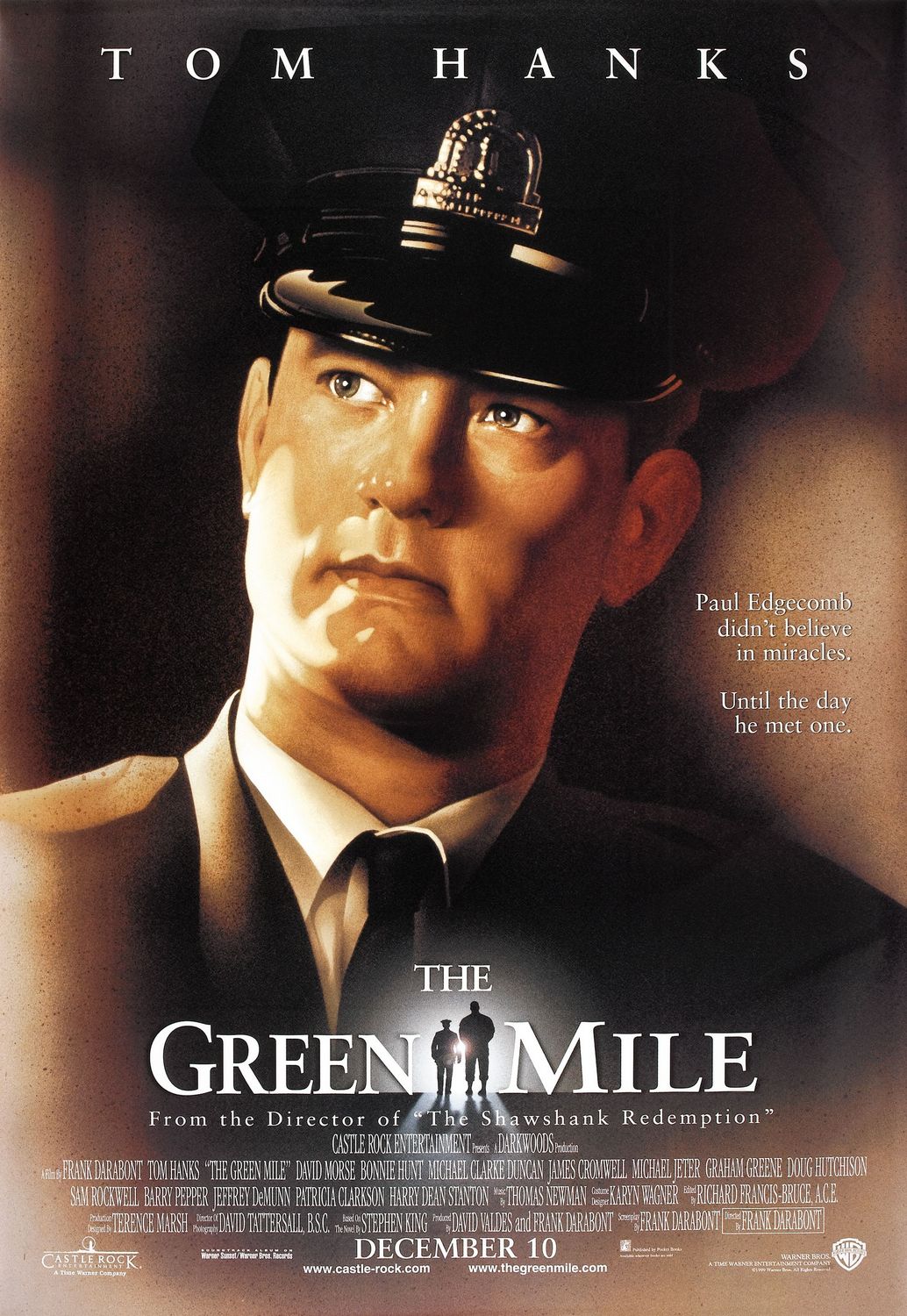