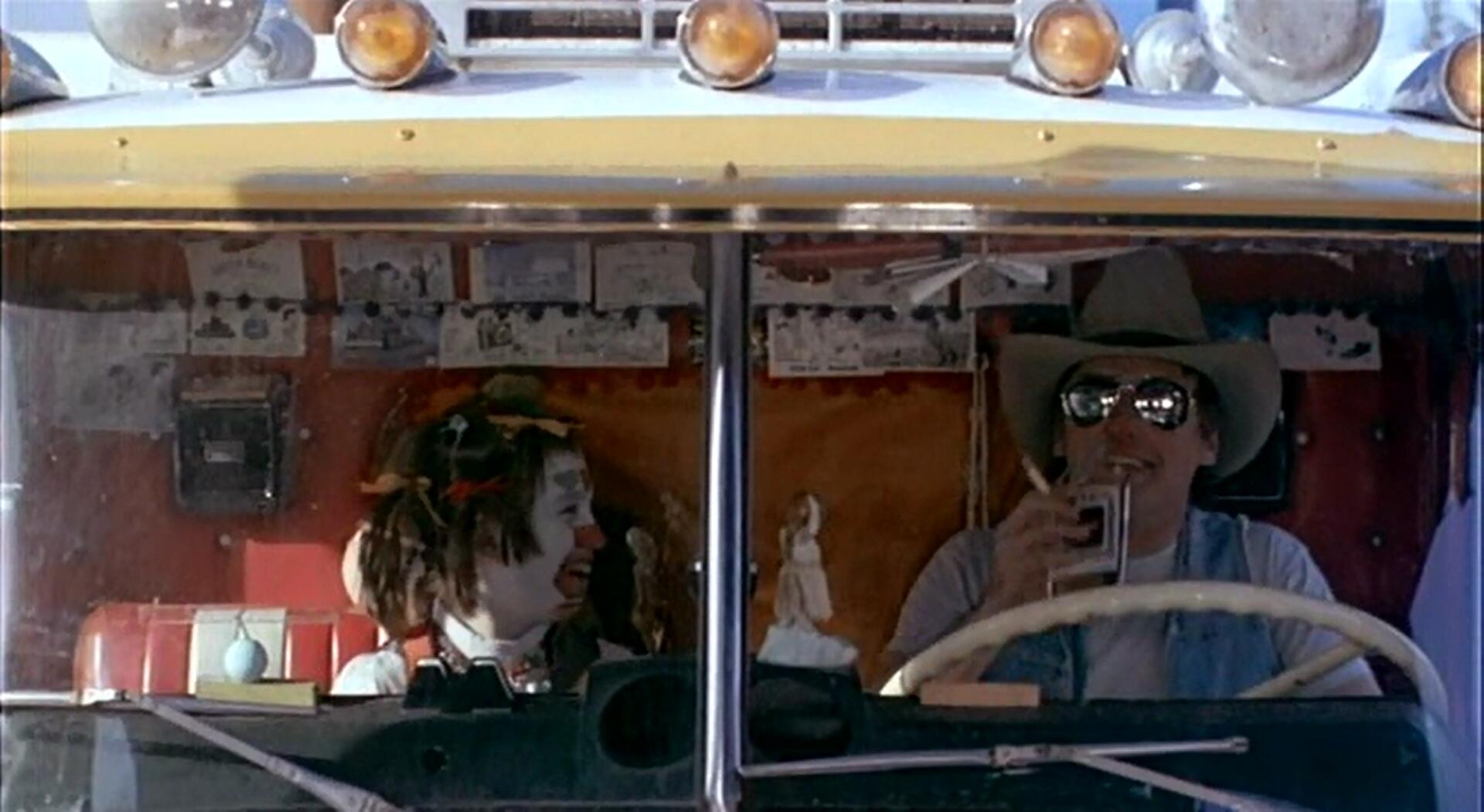 Out of the Blue

Out of the Blue: Reviewed

Dennis Hopper was a mess in the 1970s and, boy, does it show in Out of the Blue. I really wanted to like this weird movie about a rebellious young girl, but it never manages to strike the vein of realism for which it seems to be aiming, and then it gives up entirely.

After Easy Rider's stunning success, Hopper's follow-up, The Last Movie, was such a failure that it took him nine years to make it back to the director's chair, and even then, no one noticed. I cracked open my copy of Peter Biskind's great book Easy Riders, Raging Bulls to see what he had to say about Out of the Blue. It's not listed in the index. During the section on Hopper's career after The Last Movie bombed, Biskind writes that Hopper would not direct again for two decades. Hopper himself is quoted as saying, "There were 17 years when I couldn't do anything. I was stopped from making movies." Whatever else happened during that span — I'm assuming some drugs were involved — Out of the Blue was smack dab in the middle of it, but the movie is executed so hazily it's likely the director may have had little recollection of having made it.

Linda Manz (who narrates Days of Heaven) stars as Cebe, a young teen left to the care of her junkie, floozy mom (Sharon Farrell) while dad (Hopper) serves time for plowing his semi into a school bus. Cebe acts out: she picks fights with bar bouncers, runs away to hang out with punks, rues the death of Elvis, and generally tries to survive her two shitty parents until everything goes completely haywire. the title of the movie is a perfectly apt way to describe the final 10 minutes.

I love the feel of movies from the 1970s, and the oddball grainy opening shot of Cebe in clown makeup riding in her dad's truck cab was a striking start to a movie that gradually resonates less and less as it goes on. the main problem with Out of the Blue is that it seems to be targeting gritty truths but is often boneheadly off-the-mark. Take the truck/bus collision, for example, in the opening scene. This tragedy (which is presented in spectacularly horrific fashion in a later flashback) is initially staged to appear so easily avoidable, even Mr. Magoo would have had plenty of time to change course, undermining its impact. Nearly every scene in Out of Blue is constantly hopping back and forth along the line separating stupid and clever.

When the movie focuses on Cebe alone, especially the segment during which she runs off to Vancouver, B.C., it comes closest to attaining a sense of realism. However, whenever characters talk — especially the grown-ups — they only approximate human interactions. While I'm aware that characters like these exist in real life, the adults in Out of the Blue are so terrible that it beggars belief, requiring careful writing to balance their abject worthlessness with more credulous behavior, but the adult dialog is a stoner improv session on film. the characters constantly, immediately take conversations in illogical directions, fighting for the sake of forced drama, derailing any sense of verisimilitude.

Unfortunately, Cebe's dialog isn't much better. She says again and again, robotically, like an EST mantra, "Disco sucks, kill all hippies." As the editors of Destroy All Movies: the Complete Gude to Punks on Film, point out, the "punk" aspects of Out of the Blue appear to have been shoehorned in at the last minute with little understanding of it. In a movie with Neil Young played prominently on the soundtrack, Cebe is obsessed with Elvis, and likens his recent death to the departures of her other idols, Sid Vicious and Johnny Rotten. This is simultaneously sonically incongrous, chronologically warped, and biologically inept in ways that should not have escaped a sober crew. While this example is a nitpick, it's illustrative of level of care taken with the content of this movie.

The false notes in Out of the Blue eventually compound to the point that only a balls-to-the-wall insane ending can salvage it, so it succeeds at least to that degree. I can't say I liked Out of the Blue, or its ending, but they're certainly interesting and I'm unlikely to forget them. 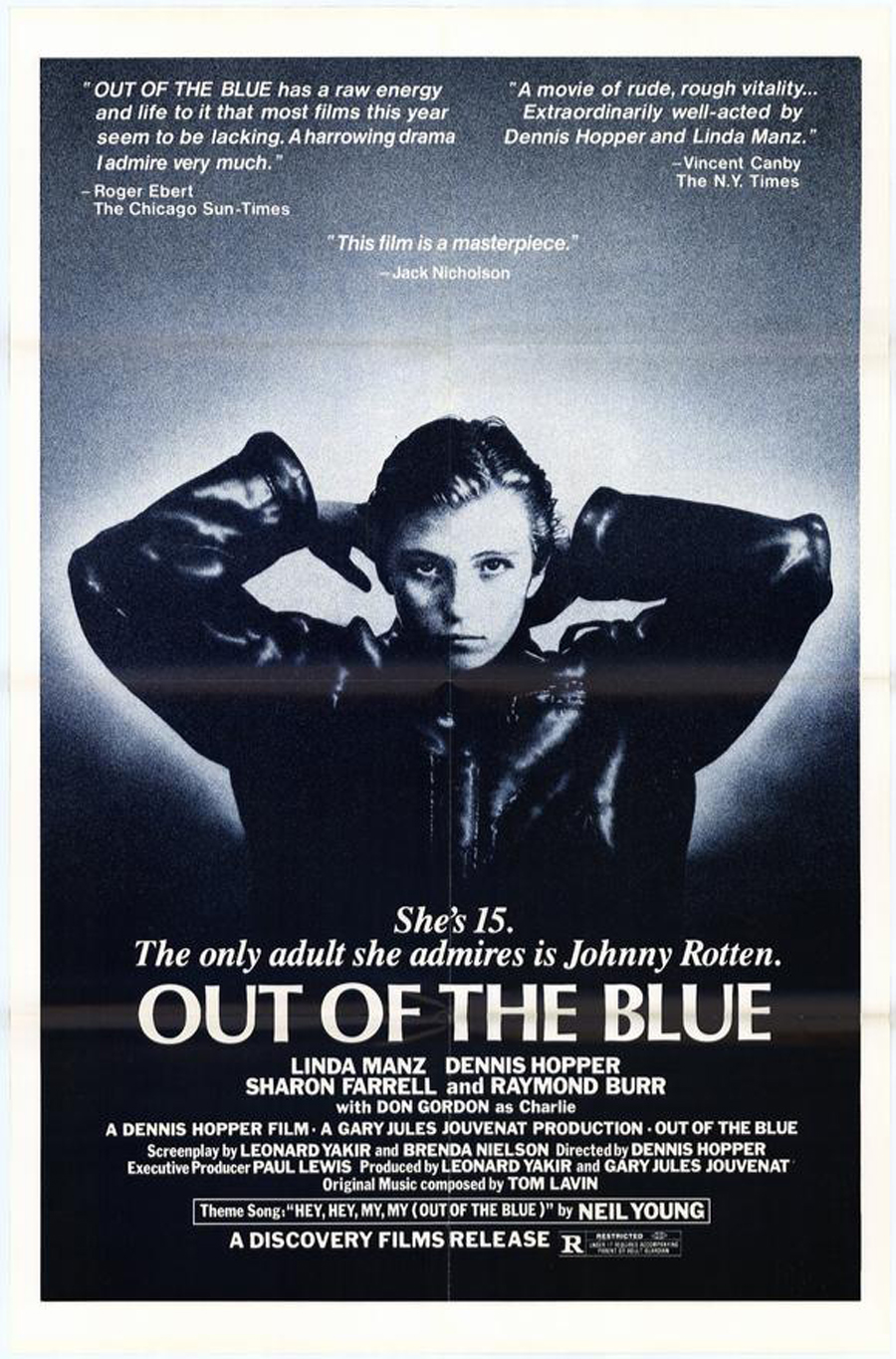