Seeking a Friend for the End of the World

Seeking a Friend for the End of the World: Reviewed

Apocalyptic-themed movies were so en-vogue at the beginning of the 2010s that this little mongrel didn't really stand a chance. It was up against dumb epics (2012), wild comedies (This is the End & The World's End) and arty dramas (Melancholia) all covering the same territory with greater sensationalism and fanfare. Seeking a Friend for the End of the World bombed, not even recouping its meagre $10 million budget at the box office. There didn't seem to be an audience for an end-of-the-world chick flick, at least not one that tries to do too many things without really excelling at any of them.

With fair warning that an Earth-destroying asteroid is on its way in one month, the world goes crazy. Cities are overrun by rioters, parents feed their kids booze, and lonely people everywhere hook-up as if there's no tomorrow. Dodge (Steve Carrell) is abandoned by his wife who would rather spend her final days with her lover. His neighbor Penny (Keira Knightley) dumps her boyfriend and wants to return to her family in England. Dodge decides to search for a lost love and help Penny get to an airplane. They hit the road, and you'll never believe what happens.

The main problem with Seeking a Friend for the End of the World is that it's all over the place. It's at its best during the first act, as writer-director Lorene Scafaria explores the insanity of humanity aware of impending doom. This is the funniest part of the movie, but it's edgy crass comedy that isn't typically found in chick flicks — which is what this movie eventually becomes. I think this may have been a situation where audiences who liked the first part never warmed up to the third, and those who came for the romance didn't care for the funny bits.

Even more problematic, however, is that the romantic aspect is the weakest link. It's far too obvious where things are headed, to the point where it's a bit exasperating when the characters are so far behind the formula. Carrell and Knightley are good, but neither character is really memorable and the movie sags a bit when they are alone together. Seeking a Friend for the End of the World is constantly buoyed by a stellar cast of bit players that include Rob Corddry, Rob Huebel, Melanie Lynskey, T.J. Miller, Gillian Jacobs, Adam Brody, Connie Britton, Amy Schumer , Patton Oswalt, Jim O'Heir , Derek Luke, Martin Sheen and a rare Wiliam J. Petersen sighting.

Despite its failings, Seeking a Friend for the End of the World has several funny scenes, and the romance works well enough from within the very narrow parameters of its stale template to make for an agreeable hour and a half. 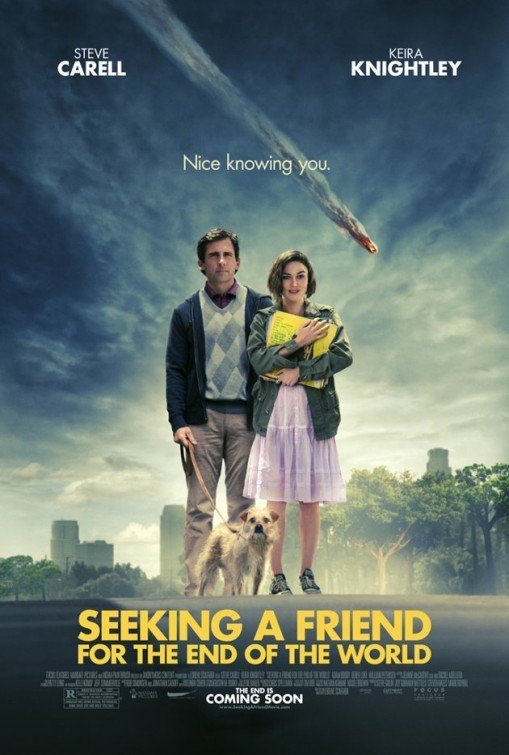