Ric Meyers gushes about Fearless in Films of Fury: the Kung Fu Movie Book. Whereas most movies from this month's list get a brief mention, and important movies might get an entire page, Fearless is given three-and-a-half pages, second only in significance to Kung Fu Panda (on which Meyers was a consultant). Fearless is treated like not only the culmination of Jet Li's career and his personal statement about the values of martial arts, but also a pinnacle of kung fu movie-making. It was good, but long, prone to obvious sentimentality, and a bit too proud of itself.

Whereas Li's magnificent Fist of Legend was a remake of Bruce Lee's Fist of Fury, Fearless is a kind of prequel — telling the epic story of Huo Yuanjia, the renowned Shanghai martial arts teacher, and leading proponent of organizing martial arts athletics, whose mysterious death has long been suspected as a murder-by-poison. Fearless follows from his childhood inspiration to learn martial arts into his development as an arrogant champion and irresponsible teacher. When this arrogance results in a (totally unjustifiable, nearly absurd) tragedy, Yuanjia exiles himself, having to relearn how to live and love on a farm with a blind girlfriend. It's kind of like Regarding Henry, but without getting shot in the head, and with a lot more punching.

My most common gripe with Jet Li movies is that he tends to play untouchable heroes, the kung fu equivalents of Superman. While Yuanjia is more flawed than many of his characters, it's purely mental. There's never a doubt that he will win every match (as long as his opponent doesn't cheat). It's kind of boring. In fact, Yuanjia unsatisfyingly takes that most common of heroic journeys — arrogant mastery, downfall, redemption, triumph — without losing a single match (well, almost; there are mitigating circumstances).

However, Fearless has several amazing fight scenes that are well-worth watching. This is one case where I wish I had skipped the 141 minute "director's cut" and watched the half-hour shorter theatrical cut. Yuanjia's journey of discovery before returning to fight again indulges a bit in several soul-healing tropes that are far too common to be presented with such extravagant fanfare as chosen by director Ronny Yu. Less of that would have been a good thing.

Fearless is also framed by anemic scenes featuring Michelle Yeoh, calling for wushu to be included in Olympic competition. It chains a rather pedestrian anchor to a movie that's biggest fault is its eagerness to announce its own importance. 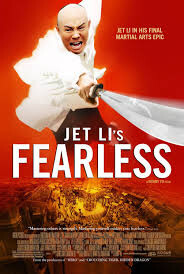