This one pains me. Following the progression from the slapdash but briefly great A Fistul of Dollars to the tightened storyelling and deeper characters in For a Few Dollars More, I was confident that The Good, the Bad and the Ugly would continue Sergio Leone's progression at pace, expanding his maturing style onto an epic scale, bettered only by his subsequent masterpiece, Once Upon a Time in the West. Unfortunately, I didn't care for his most highly ranked movie much at all until the final 25 minutes. His characters reverted back to mere types, and often cartoonishly mannered; the story was not only bereft of complexity but of the most base scrutiny; and, aside from Ennio Morricone's legendary musical score, nothing here surpasses the quality of the preceding films in the trilogy.

Both Clint Eastwood and Lee Van Cleef return from For a Few Dollars More (although their characters are different; this is a stylistic trilogy, not a narrative one) and are joined this time around by Eli Wallach. Wallach is Tuco, "The Ugly," a crude little man wanted for a litany of heinous crimes and beset by bounty hunters. Van Cleef is "Angel Eyes," a.k.a. "The Bad," so ruthless in his pursuit of a rumored buried treasure, that he'll gun almost anyone down. Eastwood is Blondie, "The Good," even though he makes a practice of collecting bounties on wanted men before subsequently aiding in their escape; at least he doesn't seem to like them, so there's that. Blondie and Tuco team up and fall out, while Angel Eyes chases down leads on the loot. After about half of this 3-hour long western, the two stories finally intersect, but instead of gaining momentum, Leone waylays his paper-thin plot with ludicrous digressions exploiting the Civil War.

Although the first 90 minutes are middlingly OK, and there are a few strong scenes scattered throughout The Good, the Bad and the Ugly, it has far too weak a story and characters to sustain its epic running time. There's an extremely long and pointless hour leading up to the finale. Each character is shallowly defined within their first scenes and never deepen or develop for the rest of the film. Acting-wise, Eastwood and Van Cleef are fine, but their excessive squinting imbues neither of them with a compelling inner-life. It's an enormous step back from the strides made by the comparative leap in complexity of For a Few Dollars More. As for Wallach, his performance is nearly insufferable, prancing and yammering like a runaway Muppet. It's like one of the generic background caricatures from A Fistful of Dollars was upgraded to a starring role but given no new notes to play. More than once, he reminded me of Rob Schneider.

However, what really derails The Good, the Bad and the Ugly is Leone's clumsy insertion of the Civil War into his narrative. Some make the case that the recurring presence of soldiers at war puts the greed of the main trio in stark relief. In theory, sure, but the execution is something else, ranging from crass to incoherent. First of all, having three central characters whose only redeeming feature, on aggregate, is that one of them is only a partial scumbag, is not a great foundation for a 178-minute film. Second, a few intersections with the Civil War are nothing but cheap excuses for Leone to introduce seemingly random, unmotivated deus ex machina canon fire that conveniently gets characters out of perilous jams (it's never explained, in one case, why either army is firing on an otherwise deserted ghost town). Even more dispiriting, however, is how Leone seems to expect that the mere presence of a large scale POW camp set full of anonymous extras, and a sorrowful music cue from Ennio Morricone, is adequate compensation for the lack of emotional investment warranted by his wooden main characters. It's a sloppy and careless grab at sentimentality that is completely modular and disposable, but presented on an epic scale equally incongruously out-of-whack with the core story.

Then Leone goes one worse with an even bigger Civil War sequence as Blondie and Tuco stumble upon a battle over a bridge that supposedly stands in the way between them and the location of the treasure. the captain in charge of the Union encampment goes on a long and inane drunken tirade about the folly of war, besting Wallach for the worst performance in the movie. It's community theatre-level scenery chewing and old western melodrama-quality writing, and simply embarrassing to behold. I guess some could argue that the unintelligible nature of this entire 25-minute block could be interpreted as a nod to the surrealism of war — and maybe it influenced a truly surreal and somewhat similar (but far better) bridge scene in Apocalypse Now — but that kind of meta-narrative has never been part of Leone's tool-set, and if it is here, he mucked it. Yet, it somehow gets immediately worse as this portion of the movie climaxes with an unnecessary major set piece that is so nonsensically conceived, carelessly executed and ultimately pointless it's bewildering.

However, the final 25 minutes of The Good, the Bad and the Ugly are very well done in a truly memorable setting — even Wallach's performance becomes tolerable near the end — and it's easy to see why many viewers come away from the movie with a positive impression, but self-respecting viewers should demand a better preceding 2.5 hours. It's far too long a film to be rescued by so little. Even then, the similar three-way stand-off at the end of For a Few Dollars More was better-edited, not to mention enhanced by characters whose fates seemed to matter.

The ungenerous film crank in me suspects that all of the massive praise heaped on The Good, the Bad and the Ugly is a function of the mostly slipshod storytelling and poor character work throughout the trilogy, which, combined with their inescapable sameness, causes the three movies to blend together in the memory. Even though For a Few Dollars More has a distinctly higher standard than the other two movies, even it is trapped within Leone's fairly limited imagination. As a result, all of the best parts of each film gets credited to this, the biggest, but in no way the best.

I had to re-watch Once Upon a Time in the West almost immediately after this monumental disappointment, and I found it as magnificent and sweeping as ever. It has a far richer slate of characters (they have super-objectives!), a more versatile cast, an even tone, and a deep humanism instead of violence for style's sake.

Discuss The Good, the Bad and the Ugly @ Letterboxd 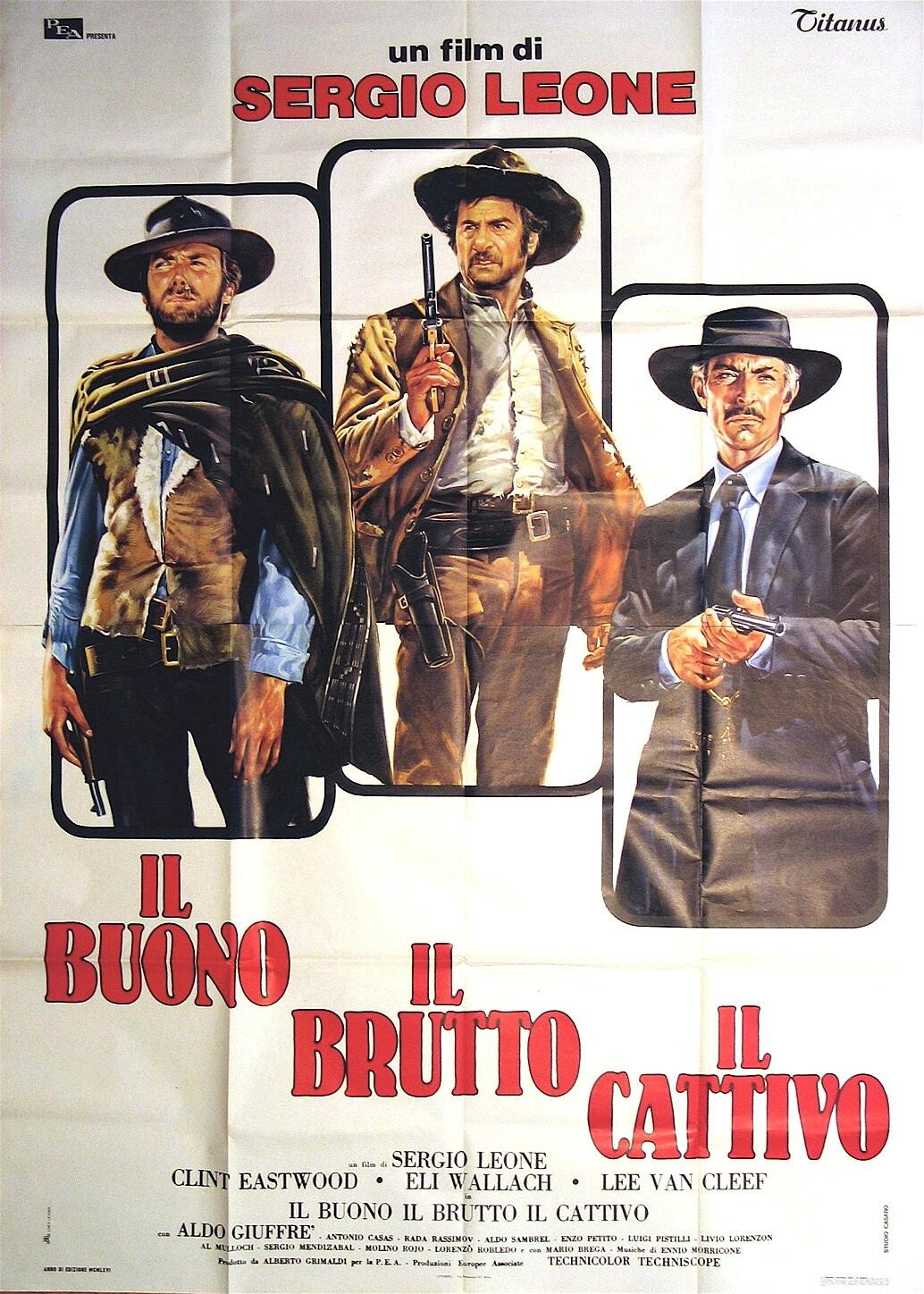