Austin Powers: International Man of Mystery should have been a movie that I've enjoyed since its release in 1997. That was back when I went to see most big new movies on opening weekend; but, for whatever reason, I delayed going to see it, and later that week went on a road trip with three friends who quoted this new hit movie for the entirety of our long drive. Both ways. By the time I finally went to see Austin Powers a few weeks later, Myers' gratuitously imitated accent and catch phrases from the movie annoyed me to my very core. Eighteen years later, the scars have fully healed, and I was finally able to enjoy this very well-done spoof of 1960s spy movies, ridiculous "mod" fashion, and outdated sexual mores.

Every month we come up against unexpected thematic connections between the movies on our PopGap list, and Austin Powers is the 2nd of the three movies we've watched so far this August in which the protagonist is awoken from a cryogenic slumber to deal with intrigues in a futuristic time. Oversexed super spy Powers is put on ice on 1967 and revived in 1997 to deal with the reemergence of his old nemesis, Dr. Evil (also Myers), who has likewise been suspended in time for three decades. the rest of the plot is a send-up of the silliest early-Bond tropes intertwined with Powers adjusting to the vastly different gender politics of the 1990s as he tries to woo his foxy colleague (Elizabeth Hurley). Meanwhile Dr. Evil hatches a plan to destroy Earth, and only half-heartedly attempts a relationship with the genetically engineered son he never knew (Seth Green).

The best parodies are the ones that maintain a sense of surprise from beginning to end, and Austin Powers doesn't do that. Myers has a very funny — but limited — box of tricks, and his targets in Austin Powers are exactly what you expect. As a result, when more conventional movies are expected to escalate and their characters to face challenges, Austin Powers has nowhere to go and falls a little flat. It keeps the quality jokes coming, but they lack momentum, and his absurdist tendencies never dig deep enough into the plot or characters to compensate for it.

However, what Austin Powers does succeed at it does better than most comedies. Myers sends-up the kitschy milieu of the genre with a scientific awareness and a genuine affection, but, more importantly, he's created two now-iconic characters, supplied them with a series of quotable lines and a lot of hilarious bits, making Austin Powers: International Man of Mystery a indelible fixture in the collective pop culture consciousness. Even though it falls short of the relentless, ingenious absurdism of Airplane! and Anchorman: the Legend of Ron Burgundy, Austin Powers is a strong comedy I can finally appreciate. 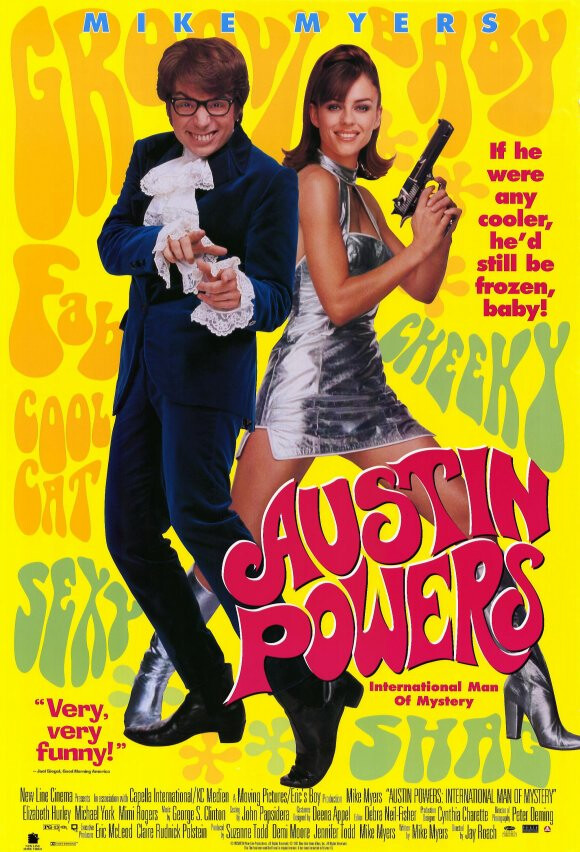