I've covered a lot of Kurosawa on this blog over the past few months, watching, for the first time, Kagemusha, High and Low, Ikiru and Throne of Blood. Extra-curricularly during that span, I've also found time to finally see Yojimbo, and I re-watched Seven Samurai, having last seen it more than a decade ago. Even with two more of the Japanese master's works on this month's list, there is little sign of hitting my saturation point. More is not only welcome, but desired. In fact, one of this month's movies, the terrific Sanjuro, is now my favorite of this year's new Kurosawa experiences, rivalling Rashomon and Ran as the best overall of a seemingly endless string of masterpieces.

As usual, Toshiro Mifune stars in Sanjuro as yet another gruff and destitute mercenary attaching himself to a cause in which his own motives are conflicted. This time, he overhears a party of nine samurai discussing corruption within their clan. Bemused by their political naivete, he directs them toward the wisest course of action, and suddenly finds himself reluctantly leading this capricious group in a covert assault on the power-hungry cabal who are framing their chamberlain. Tatsuya Nakadai is there, too, along with Takashi Shimura, and so many other familiar faces from Kurosawa's repertory, who are all typically terrific.

As I should now expect from Kurosawa, every scene in Sanjuro is a work of visual beauty. No one arranges and moves multiple characters through a frame like he does, and within the first half-hour I found myself catching my breath again and again at how effortlessly he seems to be able to turn an ordinary shot — a group of men hiding behind a bush, for example — into a visually stunning composition, and without doing anything ostentatious. the placement and movement of every person in every scene seems both meticulously designed and completely natural.

However, Sanjuro is not just an exercise in technical appreciation. It's the most thoroughly entertaining of the Kurosawa pictures I've seen to-date. Mifune's character is a revival of his role  in Yojimbo (this is a sequel in the loosest sense), but better defined and engaged in a tighter story. His undisguised contempt for the samurai for whom he assumes responsibility is the source of constant hilarity, but the frequent humor never lessens the tension; rather it springs from issues at the core of Sanjuro, and they build together toward a surprisingly powerful finale that is richly rewarding.

At only 96 minutes, Sanjuro is one of Kurosawa's leanest movies, never wasting a minute or losing its narrative drive. Mifune commands the screen with powerful grace, whether he is slicing opponents, eating a rice cake, or trying to take a nap. Visually, it's Kurosawa at his elegant black-and-white best. It's funny, exciting and profound with no conflict in the tonal shifts. It's the complete Kurosawa package and shouldn't be missed. 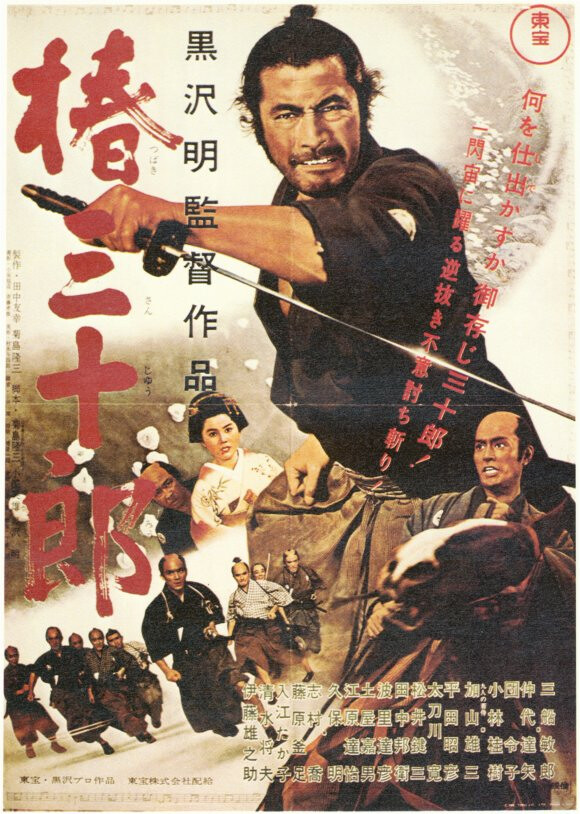 AKA: Tsubaki Sanjûrô
The Flickchart Top 250: 18 left to go
More about Sanjuro (1962) on Videopolis