When I watched Sanjuro earlier this month, I remarked that despite watching six other Akira Kurosawa movies in the past five months I didn't feel at all oversaturated with the great Japanese director's works. I wasn't quite so chipper halfway through his 1958 adventure The Hidden Fortress. It's a fine movie with some great individual scenes, but it's also bloated and sprawling and tried my patience at several points during the first half with its focus on the least interesting characters in the movie.

The Hidden Fortress tells the story of a pair of bickering half-wit layabouts, Tahei (Minoru Chiaki) and Matashichi (Kamatari Fujiwara), who stumble their way into an adventure involving three warring prefects, a hidden treasure and an exiled princess. Although they offer nothing to the enterprise beside negligible manpower, Tahei and Matashichi are coerced by a powerful General (Toshiro Mifune) into assisting Princess Yuki (Misa Uehara) smuggle a wealth of gold across enemy territory and restore her to the throne.

There are quite a few typically stunning scenes in the Hidden Fortress — an epic-sized slave revolt, a thrilling horseback sword-fight, a tense battlestaff contest, and a vibrant bonfire dance — but the early focus on Tahei's and Matashichi's misfortunes grew tiresome quickly, and Princess Yuki's development into a royal worth supporting arrived very late, making almost 90 minutes of this nearly two-and-half-hour movie drag somewhat aimlessly. While it's obvious Kurosawa was attempting to juxtapose idealism and cynicism, neither party is nuanced or dynamic enough to sustain a picture of this length, and too much of it leans on the simple belief that arguing is, by its very nature, funny, which isn't one to which I readily ascribe.

Most astonishingly, I also felt like this was the least visually appealing of the Kurosawa movies I've seen. It was the great director's first widescreen effort, and while I often find myself marvelling at his meticulous framing, I rarely felt awestruck by The Hidden Fortress. the black-and-white photography was full of muddy mid-level grays, and Kurosawa appeared to struggle with composing on the same wider canvas that he used perfectly a few years later in High and Low.

Even a Kurosawa disappointment, however, is a step above most other movies, and The Hidden Fortress has a strong legacy of admirers, including George Lucas, who took a lot of inspiration from this movie while making Star Wars. Maybe it suffered from my watching it too close to the nearly perfect, tightly scripted Sanjuro, but it just doesn't register among my favorites from this otherwise terrific filmmaker.

Trailer for the Hidden Fortress (1958) 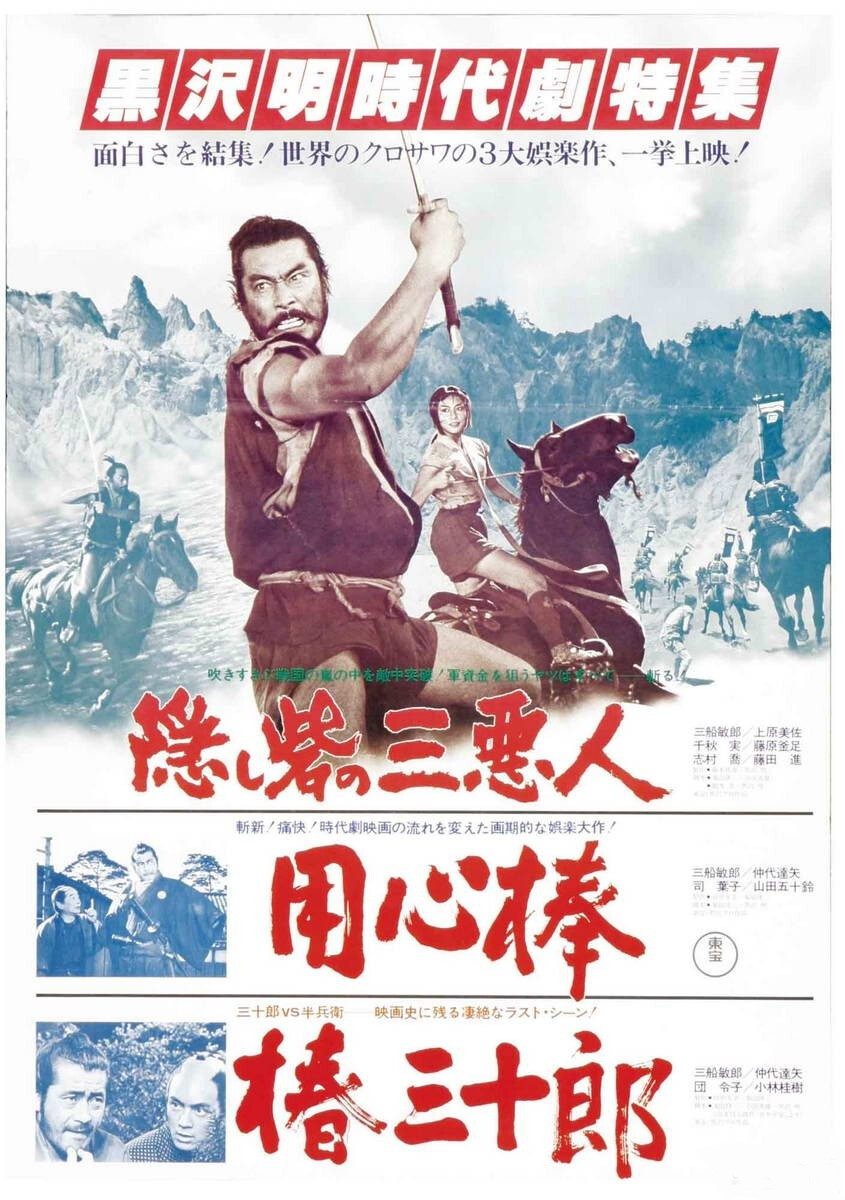 AKA: Kakushi-Toride No San-Akunin
The Flickchart Top 250: 13 left to go
More about The Hidden Fortress (1958) on Videopolis