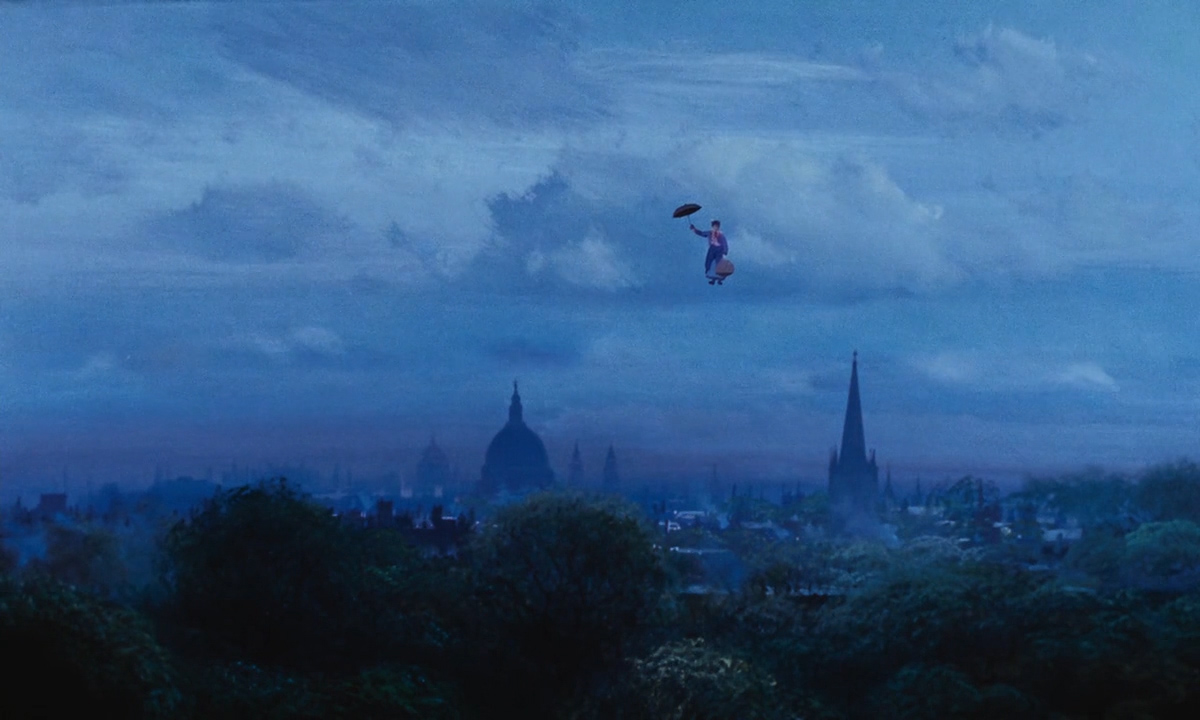 I bought Mary Poppins on DVD when my first daughter was about 4 years old. Since then, I've tried to watch it a few times and have never gotten past the first hour. My daughter just turned 12, and this November's project has finally forced me to soldier all the way through this Disney classic. As with my other attempts, I found it surprisingly fun for about 45 minutes, but then it loses me, halfway through the "Jolly Holiday" sequence. I suppose Mary Poppins is as close to a live-action cartoon as has ever been managed, but, fortunately, few cartoons go on for almost two-and-a-half hours. With some of the same restraint, I may have enjoyed Mary Poppins more; as it is, it's handsome and has a few good early laughs, but I'd prefer to never have to sit through it all again.

Julie Andrews stars in the title role as a magical governess who floats down from the sky to assume the role of nanny for two impossible children, Jane (Karen Dotrice) and Michael Banks (Matthew Garber). She leads her charges on a few magical adventures, accompanied by part-time chimney sweep/part-time one man band/part-time sidewalk chalk artist Bert (Dick Van Dyke), while the absurd adults in their lives indulge in the peculiar fixations of commerce, politics and war. Their father, George (David Tomlinson), is obsessed with seriousness, befitting his role as a bank manager; their mother, Winifred (Glynis Johns) is a boisterous advocate for women's suffrage; their neighbor, Admiral Boom (Reginald Owen), thinks his house is a boat and fires a cannon from his rooftop. After several long, occasionally fun, but always unnecessary musical numbers, George learns something new about parenting and everything is fine, I guess.

There is a surfeit of whimsy in Mary Poppins, and just enough story to fill a 22-minute TV special. I'm a devoted fan of some musicals, but not so much the ones full of songs that neither advance the story nor illuminate the characters, and the ones in Mary Poppins both seem irrelevant and go on and on and on. They do, eventually, all tie in to a theme at the end — that adults obsessed with adult issues are a big drag to kids and to other adults, alike, and would be happier if they would just go fly a kite (which could be interpreted as a pretty subversive metaphor for a 1960s Disney movie) — but it's the most long-winded of set-ups and only the most cursory of payoffs. After the end of the first act, I didn't know where the movie was going, and by the time it finally got there, I'd lost interest, and, in retrospect, the destination wasn't worth the circuitous journey.

As much as I love Julie Andrews, Mary is not a particularly interesting nor likable character. Her magic has no rules or consequences, she's rude to other adults, and is overall quite full of herself. She doesn't even seem to want be in the movie that bears her name, eventually disappearing for most of the third act. Andrews is a delightful singer, but Poppins is a cold fish. Bert, on the other hand, is so likable you want to throw him off the Tower Bridge. If it's possible to overact in an already hyperactive, colorful movie like Mary Poppins, Van Dyke figured out how. He is several notches of goofy past all of the other characters, which is winning in some moments but grating in others. By the final 40 minutes, as the film has officially overstayed the welcome of any children's entertainment, I just wanted him and all the other chimney sweeps — I wonder how this film polled with chimney sweeps — to step on a loose tile and plummet.

I didn't dislike Mary Poppins; the first third was far wittier than I expected, and it's a quite beautiful production with a clear sense of fun, and some obviously memorable tunes. It's just too damned long and, like Mary, too pleased with itself to know when enough is enough. There's too much sugar, and the medicine is just a placebo. I prefer Nanny McPhee.

Mary Poppins was the highest ranked movie I hadn't seen on the Flickchart of PurpleCow17, who ranks it at #16. My ranking of Mary Poppins at #1657 (49%) drops her compatibility score of 624 — the third highest at the start of the month — down to 689. 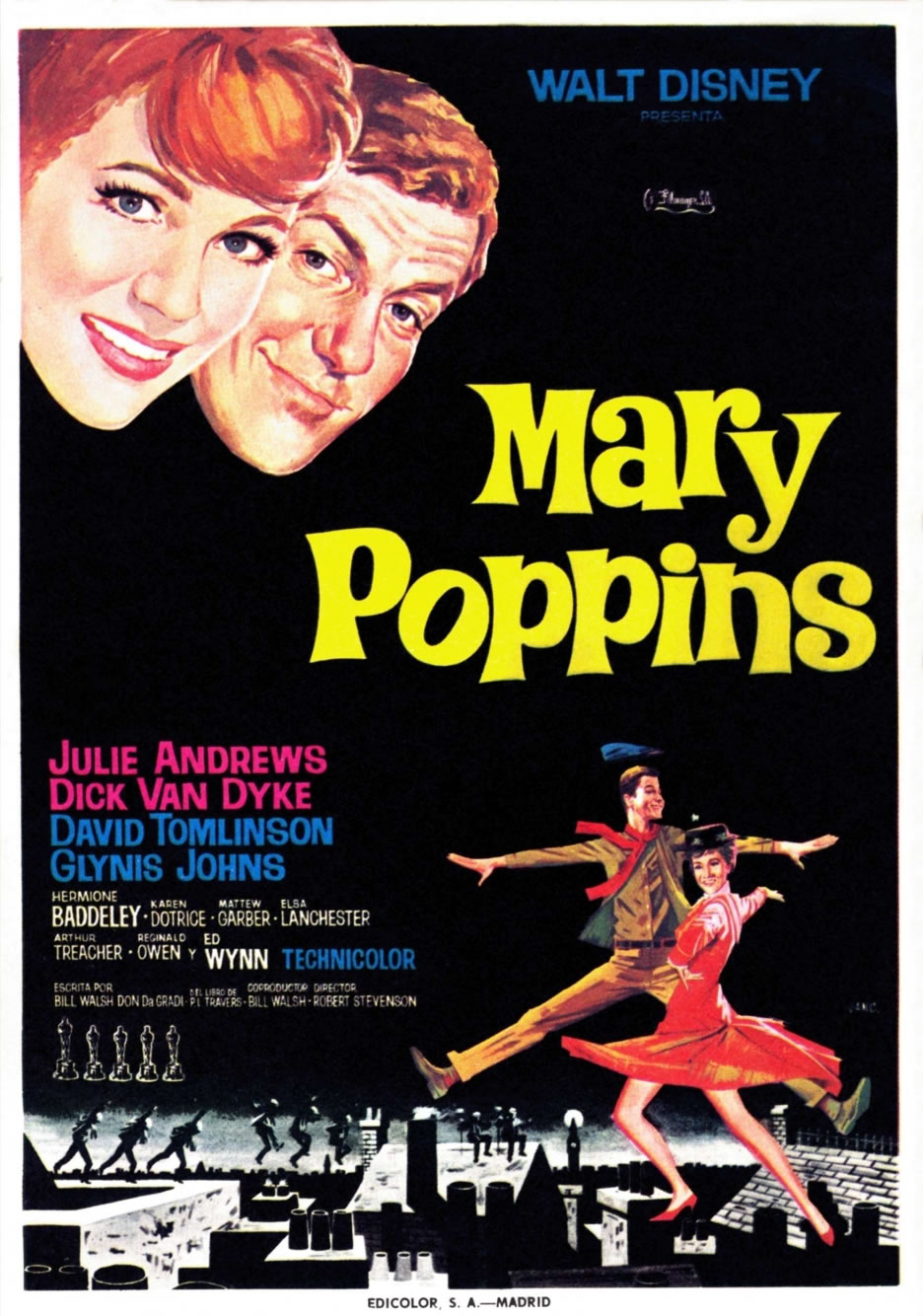