The iMovie app has trailer templates that my children use to make little movies on their iOS devices. the templates provide a generic background score, and instruct the user on which types of shots to insert in which places, and there are samples of trite boilerplate text superimposed here and there. If Seabiscuit hadn't been released in 2003, a few years before the introduction of the iPhone and its apps, I might have suspected that director Gary Ross had constructed his entire movie using one of these neat little wizards.

Laura Hillenbrand's book about the infamous racehorse, Seabiscuit: An American Legend, is no doubt terrific: presumably full of rich detail about the unusual horse, his pioneering owner, his feisty jockey, his irascible but kind-hearted groomer, and the 1930s Depression-era America that was glued to its radios during every race. the way Ross adapts the story to the screen, however, Seabiscuit is a mess of incomplete-and-yet-bloated backstories, over-produced facsimiles of nostalgia, and dialog so bad you wish it could choke a horse.

The only asset rescuing Seabiscuit from complete disaster is its likeable cast, but it damn near makes Tobey Maguire, Jeff Bridges, Chris Cooper and Elizabeth Banks into full-fledged parodies of hackneyed movie character types. Aesthetically, Seabiscuit announces its "importance" with an abundance of cliched hallmarks of "great" period pictures, stringing together a relentless parade of magic hours, meaningful slo-mos, and dark rooms with sunlight streaming through large windows into the musty haze, as if those tricks evoke anything other than different bad movies also lacking in fresh ideas and genuine point-of-view. Ross, who also claims sole screenwriting credit (who else would want it?), saves the worst for the soundtrack. While Randy Newman's lazily derivative score is a blacklist-worthy embarrassment, the addition of sporadic hamfisted narration by David McCullough just highlights how much better this story would've played as a straight-forward episode of PBS' American Experience. Even though the climactic race between Seabiscuit & the rival horse War Admiral was exciting for a few minutes, it was but a brief respite from Ross' reign of incoherent sentimental terror that combines the look and feel of a credit card commercial with the substance of a 2000-page greeting card.

Seabiscuit was highly ranked on the Flickchart of sodacreekfilm, who began the month with an encouraging Top 20 compatibility score of 578. With Seabiscuit outside his Top 20 at #27, my dismal view of it shouldn't have mattered, but his score nevertheless nose-dived 177 points, partly due to his dumping my favorite movie out of the scoring sample, but mostly due to karmic payback for making me watch Seabiscuit. 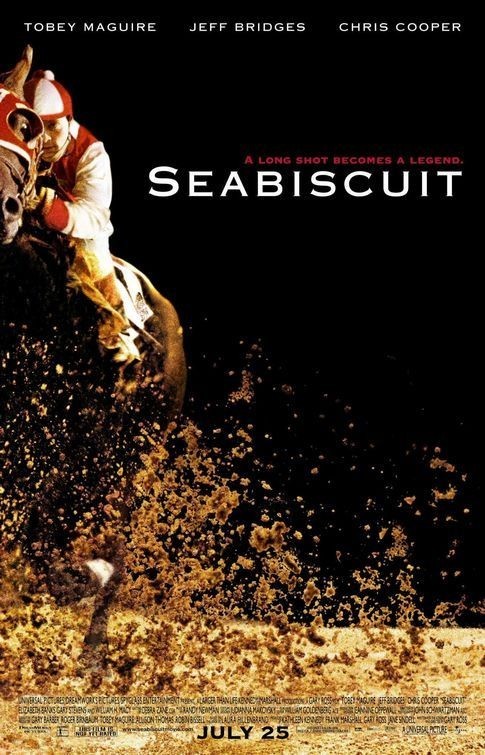