PopGap #16: The Adventures of Buckaroo Banzai Across the 8th Dimension (1984)

The Adventures of Buckaroo Banzai Across the 8th Dimension is another rare PopGap selection that I've seen multiple times, although in this case most of those were in the mid-1980s, when it played on cable movie channels as a semi-permanent fixture. While I tend to retain strong feelings about the movies that I watched over and over as a teenager — often even the bad ones — Buckaroo Banzai is one of those puzzling efforts that leaves an utterly blank impression. It's a movie that seems as if it was engineered to become a "cult classic," and it's certainly gained a soft-ish reputation as such, but its surprisingly bland execution pales in comparison to the neat but unrealized concepts of its crazy premise and eccentric characters.

Peter Weller stars as Buckaroo Banzai, an idolized surgeon/scientist/pop star/comic book hero/adventurer, whose trailblazing experiment with transdimensional travel inadvertently causes an interstellar crisis. A sect of fascist alien outlaws who have been hiding on earth since their exile following a failed coup on their home planet, see Banzai's technology as their ticket home, but the leaders of Planet 10 would rather destroy the Earth than chance a new war with Lord John Whorfin (John Lithgow) and his Red Lectroids. It's up to Banzai and the Hong Kong Cavaliers (his gang of brilliant but fashion-obsessed oddballs) to stop the evil Whorfin and save the world.

In concept, there are some strong & fun ideas in The Adventures of Buckaroo Banzai Across the 8th Dimension. the Red Lectroids, who are all named John (John O'Connor, John Gomez, John Small Berries, John Bigbooté, etc.) — and are played by neat character actors like Christopher Lloyd, Vincent Schiavelli and Dan Hedaya — crossed over from their 8th dimension prison on October 31, 1938 — the date of Orson Welles' infamously deceptive War of the Worlds radio broadcast that convinced many listeners of a real-life alien invasion. Lord John Whorfin himself crossed over to earth by possessing the body of crazed scientist Dr. Emilio Lizardo (Lithgow), whose subsequently expanding looniness led to his incarceration. Banzai falls in love with the suicidal long-lost twin sister (Ellen Barkin) of his dead wife. Banzai's gang — which includes Clancy Brown, Pepe Serna, Lewis Smith, Billy Vera, and Jeff Goldblum in a red cowboy outfit — is practically bursting with playful potential. Even Yakov Smirnoff and Jonathan Banks make appearances in minor roles, and yet, it's all fairly lifeless.

Aside from Lithgow, who seems to have been given free reign to chew the scenery with a conservative allowance of fairly amusing dialog, the rest of the cast practically sleepwalks through The Adventures of Buckaroo Banzai Across the 8th Dimension. Understated performances might have worked brilliantly as a counterpoint to the craziness had director W. D. Richter or screenwriter Earl Mac Rauch put more effort into fully realizing a madcap world for the characters to inhabit, but they seem to have been coasting on the strength of their one-sheet summary. Banzai and his friends are, regretfully, complete dullwoods and, Whorfin aside, their enemies aren't much more interesting.

There's never a point at which The Adventures of Buckaroo Banzai Across the 8th Dimension slips into incompetence, but prosaic technical proficiency and narrative ordinariness are flaws in a movie that promises style and uniqueness. With only one or two memorable lines of dialog, the movie doesn't even qualify as a camp, and there are neither any themes nor subtext. It's a superficial facsimile of a B-movie from creators with nothing to say and whose ideas stop just short of clever. It would be a perfect example of an uninspired comic book adaptation, except that in this case the movie came first, and I wouldn't be surprised if, unusually, the comic books that followed were more clever, playful and maybe even deeper than their source material.

Discuss The Adventures of Buckaroo Banzai Across the 8th Dimension @ Letterboxd 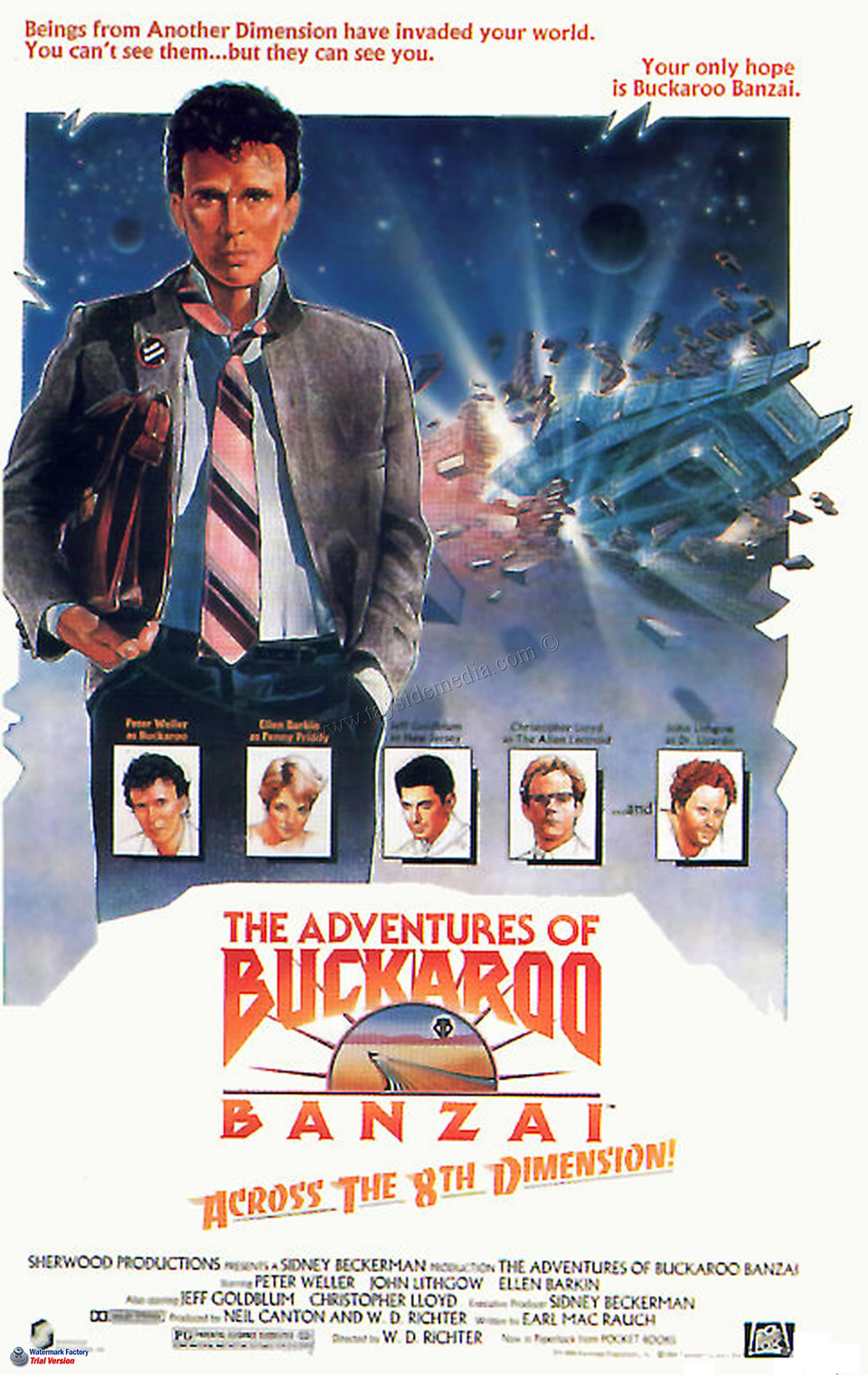