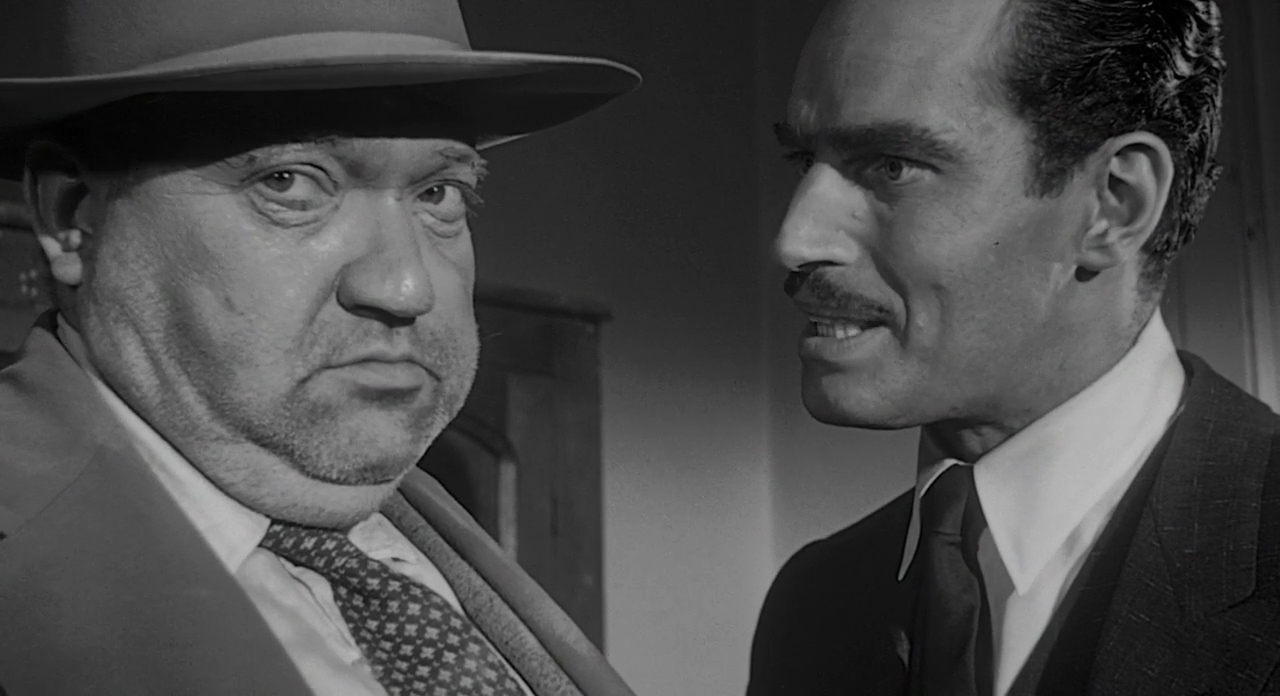 Touch of Evil is both undeniably brilliant and extremely flawed, and often simultaneously. Unlike most of the movies that I watch as part of PopGap — which are usually either entirely new-to-me or obscured by the fog of distant memory — I've actually seen Touch of Evil more than a few times, but while its most striking sequences and performances linger powerfully, much of the rest of the film evaporates within days. Welles' series of forward-thinking technical adventures are muddled by substandard plotting and unrealized thematic ideas. Very little of the story or its themes stick, but, at its best moments, Orson Welles' last Hollywood movie is an occasional masterwork of seedy menace and a ballsy example of how real vision can energize and distinguish ordinary B-movie material.

Touch of Evil stars Charlton Heston as Vargas, a crusading Mexican law enforcer on the eve of prosecuting a border town's drug kingpin. He and his new American wife, Susan (Janet Leigh), cross over into the U.S. for a date and witness a car bombing with international implications. Vargas insinuates himself into the investigation, even though he has no jurisdiction outside his own country, much to the annoyance of the powerful & shady American police captain, Hank Quinlan (Welles). Based on the novel Badge of Evil by Whit Masterson, Touch of Evil is largely uninspired pulp, but even though Welles seems restlessly bored by the narrative during stretches — he concentrates instead on the shadows, the angles, and picking out key points of exaggeration — there are scenes during which he juices it with an alarming fervor.

Everyone talks about Touch of Evil's famously dazzling three-and-a-half minute single-take opening shot, but Welles' film is stuffed full of adventurous technical ideas that don't come off quite as smoothly, but are no less impressive. There is an even longer single-take shot later in the film, as Vargas, Quinlan, and other investigators converge in a suspect's hotel room, which tracks multiple conversations and actions for over five minutes within a crowded confined space. This scene is potentially more complicated, even though it covers less ground, because Welles throws in yet another innovation that was anathema to Hollywood filmmaking of the 1950s: overlapping dialog. It's a boldly staged and executed set piece, except that the constant movement of the camera along with the dense and careful multi-layering of sometimes inaudible voices obscures the scene's narrative meaning — at least until its final revelation, which carries grave consequences. the prevalence of chatter is also notable to Touch of Evil's reputation as the last film noir, at least of that genre's heydey. While most noir dialog is expressed through the terse declarations of taciturn tough guys and their manipulative dames, Touch of Evil is full of chatterboxes who really have nothing to say, predicting a style of writing, staging and directing that would become commonplace a decade later. Elsewhere, Welles throws in other sneak peaks at the future of movies, such as an in-car conversation filmed on an actual road, with Heston really tearing through alleyways at high speed, instead of using the artifice of rear projection. This dynamic approach may not enlighten the forgettable content of the scene (maybe thankfully, it distracts from it), but this kind of bracing realism was so out-of-the-norm in 1958 that it actually works as part of Welles' stylized vision rather than against it.

Historically, Touch of Evil is fascinating, from the rumors of its dubious genesis, to the studio's impatience with Welles' unorthodox ideas and petulant behavior, and finally the movie's reconstruction in the 1990s from a 60-page memo Welles wrote to the studio after being fired from the project. However, this kind of context, which adds layers of appreciation from a removed perspective, might not help many viewers enjoy the immediate experience of Touch of Evil. There are long stretches of exposition that lack tension, the broadly drawn characters are only statically interesting, and following the initial incident the entire case is a snooze until the last few minutes. Heston's Vargas is such a weak protagonist (overlooking his embarrassingly darkened skin) that the movie forgets about him during its final moments, delivering instead a cryptic assessment of Quinlan through a seemingly irrelevant minor character (played with unearned presence by Marlene Dietrich). There even appears to be a half-explored subtext comparing Vargas' and Quinlan's masculinity and inexplicably siding with the latter.

It's hard to say that there are any narrative ideas at play within Touch of Evil, but it doesn't seem to matter; Welles' dark, seamy carnival-like depiction of corruption is so aesthetically grimy that it gets under your nails without even asking you to dig for substance. Its best scenes concern a subplot involving a drug mob's stalking of Susan (which wouldn't be the last time Janet Leigh would spend an uncomfortable evening a roadside motel). Leigh's fiery-but-naive sense of entitled invulnerability is brazenly engaging, and Welles ramps up fantastic tension in every one of her scenes, which get better and better throughout. It's as if Welles is exorcising a grudge against a precocious woman — or, possibly, her careless husband — but there's such a visceral thrill of danger in Leigh's segments one might assume this woman-in-peril movie is the one Welles felt compelled to make, while treating rest of it like a tinkerer's workshop.

Even given all of my issues with Touch of Evil's content, it's an energizing movie to behold. Its best parts are as good as filmmaking gets, and its weaker scenes at least showcase Henry Mancini's vibrant music and Russell Metty's perfect photography. Regardless of the story, there are virtuoso accomplishments around every shadowy corner, and given how far ahead of the times Welles was operating, it's a shame that he wasn't able to capitalize artistically on the relative freedom of the 1970s. 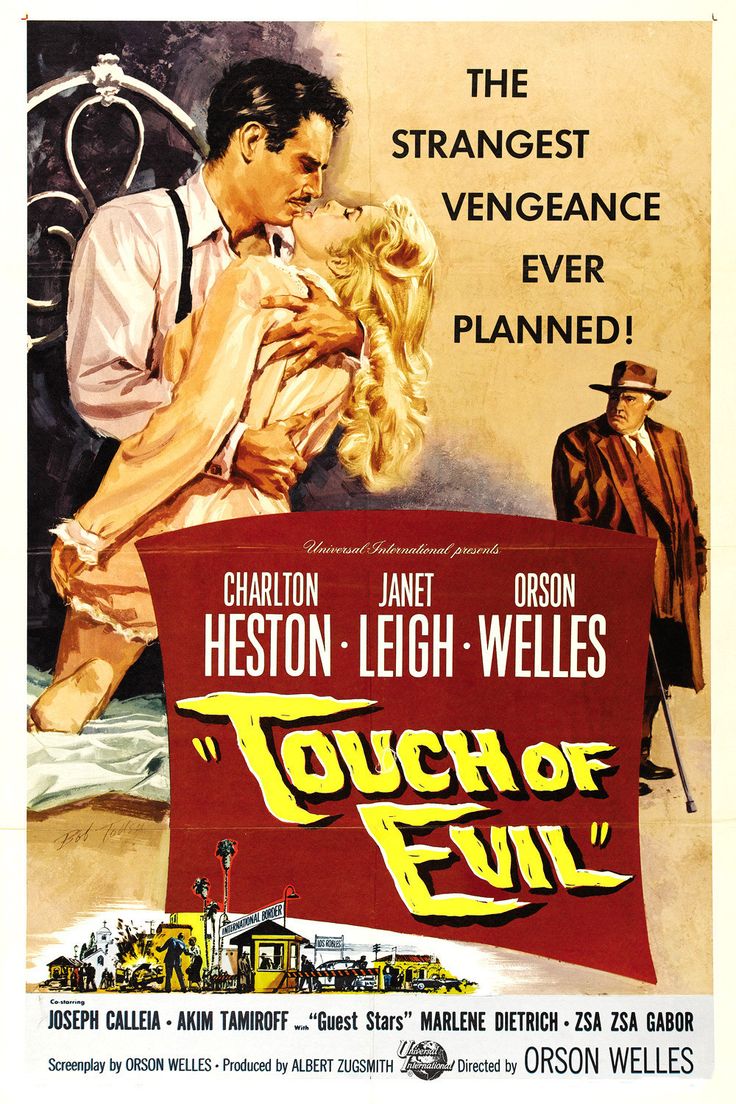