The late 1980s saw violent action blockbusters emerge from crude popcorn entertainment into, briefly, a highly technical art form, culminating in John McTiernan's Die Hard. Die Hard upped the ante from the previous year's progressive Lethal Weapon, at last seamlessly melding the gritty savagery of the previous decade's crime thrillers, the emotional catharsis of Spielberg-era spectacles, and the pervasive culture of comic-booky one-liners, all with astoundingly high quality. As usually happens in Hollywood, however, once a genre reaches its perfect incarnation of commercial appeal and professional craft, it gets turned into a science and clones are produced en masse, with all the familiar characteristics of its success aggressively adhered onto other projects, whether or not they fit. Kathryn Bigelow's Point Break came in the first wave of Die Hard clones and, despite the three tremendous action sequences that have earned it a cult following, is weighed down by a screenplay that's been too heavily engineered to hit every new trope of the Die Hard format.

Keanu Reeves stars as Johnny Utah, an FBI rookie whose first assignment is to assist partner Angelo Pappas (Gary Busey) in bringing down a prolific gang of bank robbers who wear masks of former presidents while committing their crimes. Pappas' highly ridiculed pet theory is that the peeps are a gang of surfers, and Utah, who has never surfed before, is sent undercover to scour the beaches for likely suspects.

Point Break is stuffed so densely with wall-to-wall tropes that it barely has room for its own plot. Nearly every screenwriting 101 obstacle is introduced and then effortlessly surmounted, and usually in the following scene. In one scene Utah & Pappas scream at each other; in the next they are high-fiving best buds. In one scene, Utah is deemed a hopeless prospect as a surfer; in the next he's completely proficient and a love interest for his teacher (Lori Petty). Utah not only immediately stumbles upon a connection to the gang, but within just a few minutes he earns the approval of surf cult godhead Bodhi (Patrick Swayze).

Not everything comes easily, however; Point Break aggressively convolutes what should be the most simple. Once Utah realizes the identities of the outlaws, he is emotionally unable to arrest to them — despite increasingly heinous transgressions — because he has, essentially, no personality or will of his own. It's too easy to assign the blame for Utah's void of character to Reeves, who is typically awful. Unable to even chew, run, or give a "thumbs up" without looking like an ineptly posed mannequin, Reeves also adds no inner-life or sense of purpose to Utah. During a scene in which Utah must suspect that he is about to be killed, Reeves whoops and grins as if he's on a holiday. In one respect, it's a rare glimpse of authentic human emotion from an actor who generally resembles furniture, but it's completely wrong for the context and character. However, the writing is just as complicit in Utah's lack of integrity. He's introduced as straight-laced, sharp and determined, but is also fearlessly brash and disrespectful to his superiors at the FBI. At the same time, he is ridiculously gullible around his romantic new surfer friends and lets a personal grudge steer his investigation with no evidence to support it. Later, a bank robbery happens across the street from Utah as he obliviously buys hot dogs with his back turned, suggesting that he's also comically stupid, at least when the screenplay requires it. Another actor might make something fascinating out of all of these contradictions, but Reeves is not that actor.

Director Kathryn Bigelow helms some fantastic action sequences in Point Break, including one of the best on-foot pursuits outside of Jackie Chan's canon, allowing the schizophrenic and gimmicky script to drift into the background as soft-focus camp. If the script had been up to that standard of the action, Point Break might have been something really special; instead it's mostly disposable. Fun early or rare appearances from James Le Gros, Tom Sizemore and Anthony Kiedis. 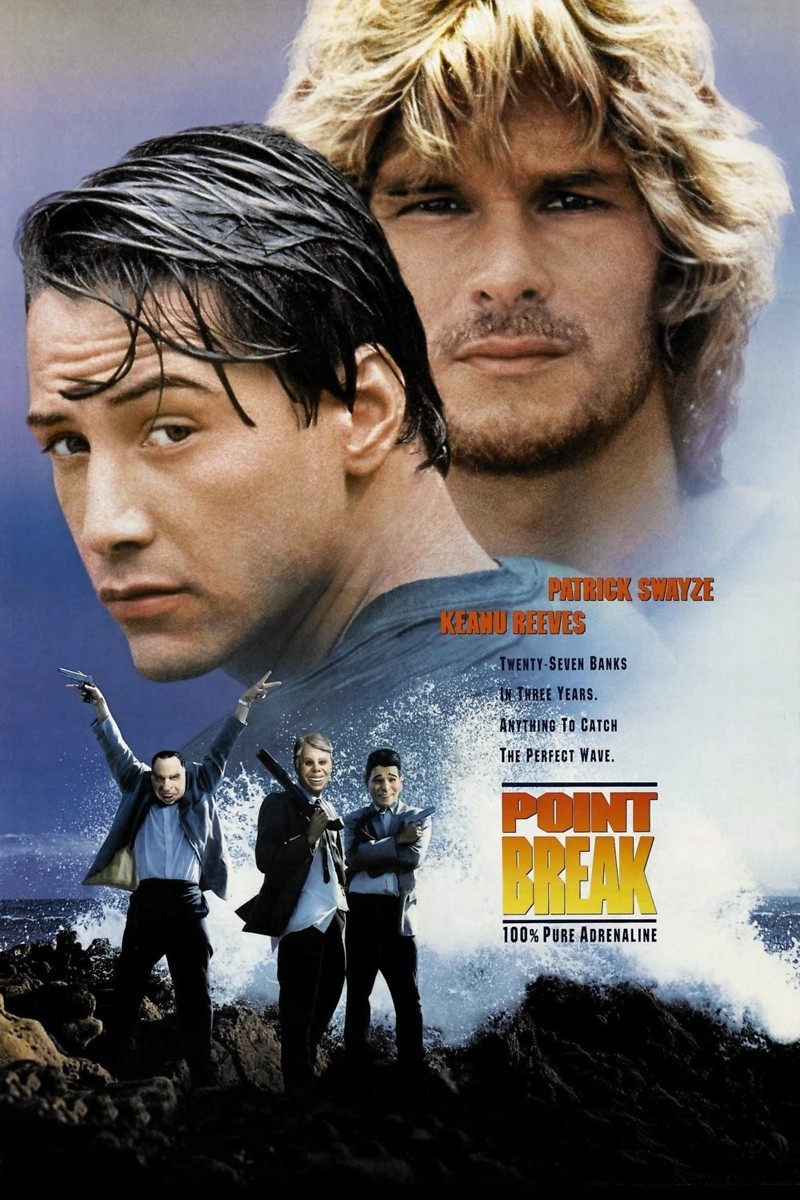