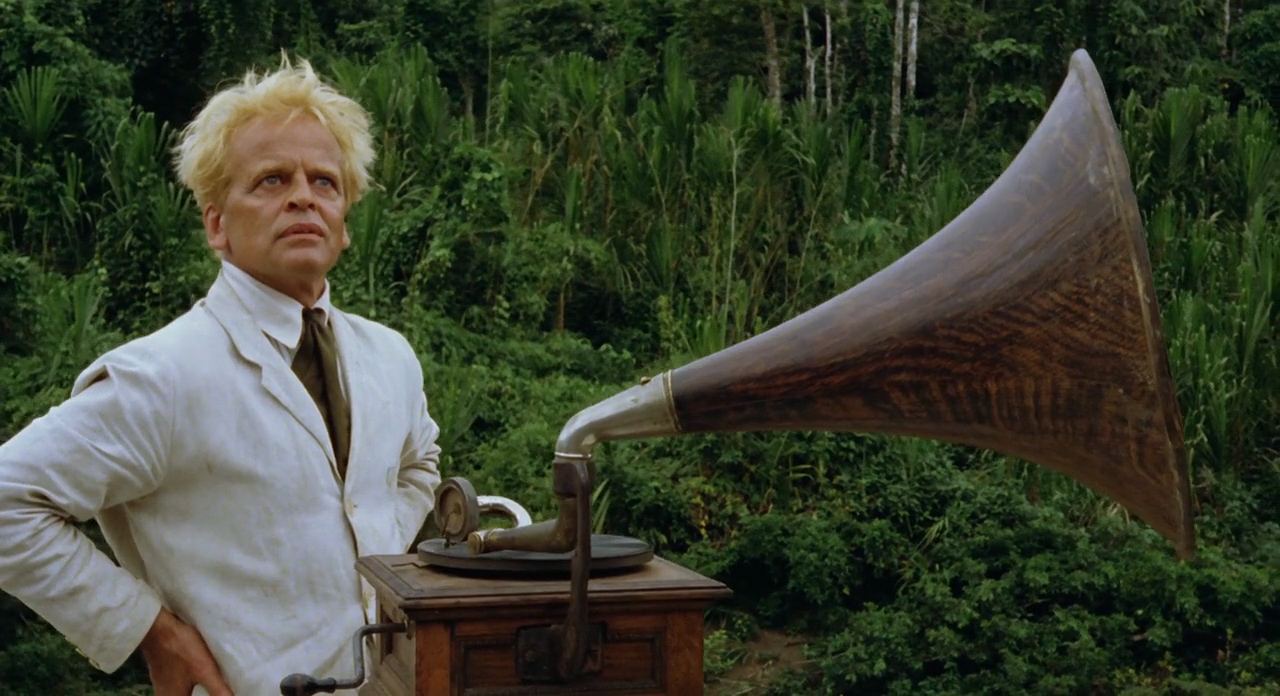 I want my opera house!

I'm steadily gaining an appreciation for director Werner Herzog, as it took me quite a while to align myself to his curious brand of filmmaking. He's an adventurer and philosopher first, and second a cinematic opportunist who likes to point his camera at the crazy output of the volatile elements that he brings together. I almost always feel that Herzog's movies are marred by a lackluster sense of purpose and an almost-indifference to the technical aspects of writing and editing. With his chosen subjects and settings, however, there is never a shortage of impressive visuals, and his weird muse Klaus Kinski always puts on a fascinating pageant of some sort, and sometimes it amounts to acting. Herzog's movies feel simultaneously inspired and accidental, as if they simply sprung forth from a previously undiscovered chemistry that was generated solely by the very questionable act of embarking on an inadvisable project. Maybe that sounds uncharitable to a man considered among the great auteurs of the German New Wave, and who is still producing a vital body of work to this day, but it's the only way I can explain the gripping and yet alienating dissonance I feel while watching his movies, and why his 1982 epic Fitzcarraldo may well be his masterpiece.

Klaus Kinski stars as Brian Sweeney Fitzgerald, an ambitious industrialist whose attempts to strike it rich in the jungles of Peru have failed time and again. His Trans-Andean railroad has been abandoned and overgrown by flora, and there are no buyers for his chemically produced blocks of ice. His heart is in none of these projects, they are only a means to an end: Fitzgerald wants to be rich so that he can build a glamorous opera house in his remote outpost and attract the biggest European stars, including his idol, Enrico Caruso. Using the savings of his brothel-running lover (Claudia Cardinale), Fitzgerald sets out on one final crazy scheme, one that will either make all of his dreams come true or ruin him forever, and it's every bit as grand and dramatic as the art form that obsesses him.

Filmed on location in the Amazon basin, Fitzcarraldo is blessed with naturally stunning assets, and Herzog's typically overlong gaze drinks them in with his usual extra measures of deliberation. Even though this chronicle of misguided ambition is nearly three hours long, it feels shorter than some of Herzog's less indulgent movies, and maybe this is because there is so much of Herzog in his main character that he's able to project a consistently compelling strain of his own self-aware (and comparatively mild mannered) mania into this story. Kinski is as irascible and bug-eyed as usual, and few other actors would be able to credibly sell the idea of a man determined to pull a 300-ton steamship over a mountain, but Kinski is so naturally free of common human restraints that his insanity is never in question. It's a nice touch that the wonderful Cardinale, as Molly, never argues with, judges or worries about Fitzgerald; she is firmly and affectionately supportive, as if it's his very peculiar detachment from common sense that she loves the most. It adds a warmth-by-reflection, and a rascally innocence, to his character that Kinski would have no interest in developing on his own. Although very similar in many respects to the earlier, very good (and much shorter) Herzog/Kinski collaboration Aguirre, the Wrath of God, Fitzcarraldo is a perfect synthesis of Herzog's relentless preoccupations and his narrative, and it feels deeply personal in ways that many of his other movies, with their more obtuse subjects, never approach.

Fitzcarraldo, with its incredible premise and troubled production, is notably one of just a few movies to spawn a feature-length making-of documentary which is nearly as good as the movie itself. Les Blank's Burden of Dreams captures not only Herzog's dually Sisyphean persistence, as making his movie is very much as difficult as hauling a ship overland, and he miraculously accomplishes both, but his equally fascinating use of indigenous Peruvians as actors and crew. Seventeen years later, Herzog directed another documentary, My Best Fiend, looking back at his tempestuous relationship with the late Kinski, and shedding some additional light on their weird alchemy as co-antagonists and how it informed this considerable, legendary film. 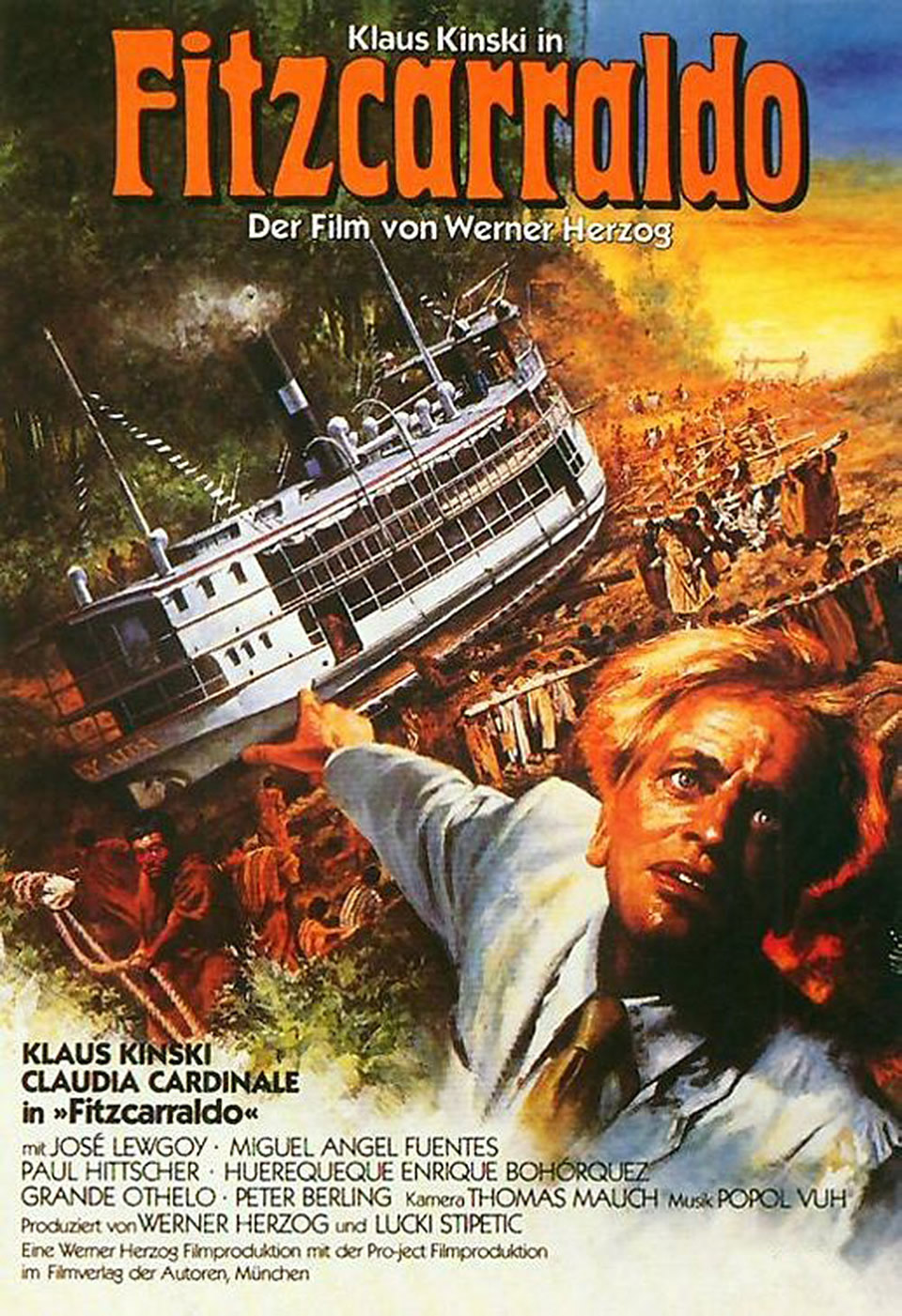