I'm at the Super Bowl Restaurant. Someone wants to kill me.

When I became enamored with Hong Kong action cinema in the 1990s — as the gunfighting operatics of John Woo and the visionary stunt work of Jackie Chan began playing in American art house theaters — there was as much guarantee of seeing something extremely silly as there was something amazing. Woo laid the melodramatics on so thick that his movies worked as high camp and thrilling action; Chan's stunning kung fu set-pieces usually alternated with scenes of goofy personal issues marked by uncomfortably juvenile sexual politics and humor. These were filmmakers who dealt in extremes, and even their best movies contained cringeworthy moments as the ludicrous balanced the sublime. After Woo and Chan moved to Hollywood, I didn't keep up with either them or what was going on in Hong Kong in their absence, so I missed Johnnie To's emergence as its new number one action filmmaker, and the strikingly different tone of his movies from the biggest hits of the previous decade.

Lean and steady, To's 1999 thriller The Mission recycles the well-established tropes of the Hong Kong gangster movie, but expresses them with measured tension rather than explosions of hyperactivity. As a team of bodyguards is assembled to protect a restaurant owner targeted for assassination, To seems as interested in mundane daily minutiae as he is the moments of crisis, building a nice sense of professional camaraderie amongst his protagonists as they wait and wait to be called into action. Even though there are a few standout sequences of meticulously staged and gripping face-offs — and several instances of that old Woo chestnut of multiple hard men simultaneously pointing guns in each other's faces — there's a lot more of Michael Mann's brooding in To's style than the typical Hong Kong energy, not to mention a hint of the rueful fatalism of Jean-Pierre Melville's French New Wave drama Le samouraï.

With a cast of well-picked character actors — Anthony Chau-Sang Wong, Francis Ng, Jackie Lui, Roy Cheung, Lam Suet — fleshing out a minimalist script, The Mission is engaging and exciting, but maybe over a little too quickly. Delegating characterization to the actors works to an extent, but compared to the much longer Mann and Melville movies that The Mission emulates — even the relatively short Le samouraï is 20 minutes longer — it lacks a depth and richness that resonates afterward, leaving the implications of his patient and otherwise well-considered style only partially explored. 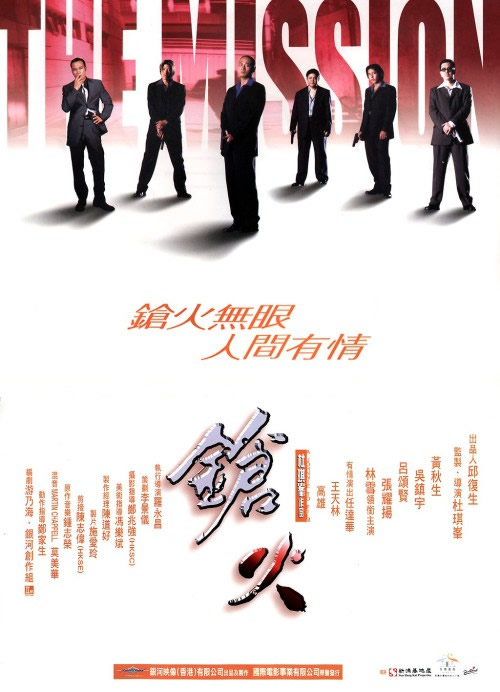