Rosetta, the 1999s Cannes Palm d'Or-winner by Belgian brothers Jean-Pierre Dardenne and Luc Dardenne, was the movie I was looking the most forward to from May's Potluck Film Festival selections. Everything I've heard about the Dardennes' style and projects, which I gleaned to be of a piece with world cinema's great cinéma vérité humanist works, like The Bicycle Thieves and Pather Panchali, seemed like a natural fit with my tastes. And, in many ways, Rosetta is exactly what I expected; however, it also displays a tendency to favor sensationalism over verisimilitude, which often challenged, if not broke, my empathy for its heroine at key moments.

Rosetta (Émilie Dequenne) is a teen living in the desperate margins of society. in spite of her shiftless alcoholic mother, Rosetta is both willful and resourceful, scrounging to survive day-to-day while pursuing the Holy Grail of a dependable, full-time job. If only life were that easy: Rosetta's instincts for survival clash with her sensitive moral compass. She also has a frightful temper, with which she lashes out at perceived injustices, as if any "unfair" setback might spell the end for her (a valid concern), and horrid menstrual cramps on top of it all. Life, for Rosetta, is a series of painful challenges, and to such an extent that even in the wake of a substantial victory, the unrelenting hardship can seem like too much.

Dequenne, who shared the 1999 Cannes Best Actress award with Séverine Caneele for L'humanité, is terrific in her debut, capturing Rosetta's stubborn determination, and the Dardennes' directing is bracingly raw but never loses its sense of intimacy or tenderness. Rosetta makes an interesting companion piece to The Bicycle Thieves, which is also a story of acute economic desperation. While de Sica's Italian Neorealist classic depicts the strain of a chronically irresponsible parent on his young son, Rosetta, in a way, merges those two characters: Rosetta, with no functioning guardian, is both the difficult, short-sighted adult and the helpless child. Where The Bicycle Thieves illustrates the devastating effect that a capricious older generation has on the next, Rosetta highlights the shattering implications of forcing the future generation to assume the entire weight of their existence.

There's an undoubted profundity to Rosetta, but, at crucial times, the Dardnennes overplay their hand, and with their directorial approach consistently dispassionate, the brunt of the sensationalism falls on the title character, making her a particularly troublesome figure. It's hard to begrudge Rosetta — a character with no parental guidance and possibly a genetic (or fetal alcohol-induced) predisposition to self-destruction — her tragic flaws, but within them there's also the faint whiff of a typically condescending view of lower class un-sophisticates, a demographic which artists too-often reduce to helpless brutes. the character of Rosetta is admirably defiant in some respects, mitigating the film's potential to animalize her, but, as in life, the narrative presents some insurmountable obstacles. The Dardennes' style of storytelling does not appear to include careful structural crafting behind their rough docudrama veneer, but rather just a messy, purposefully anti-dramatic spilling out of of a life in disarray. Although the final scene contains a conceptually stirring irony, and the painful implications of it do not go unnoted, it's also such a drastic turn from expectations, that it's more jarring than it is effectively heartbreaking. Perhaps it's part of the point of Rosetta to confront its viewers with both a film and a world within a film that relentlessly erode Rosetta's resilience, but, if so, it may take me a while to fully accept and appreciate it for what it is. 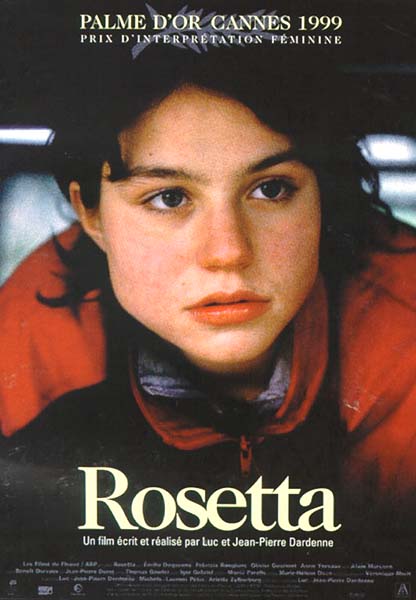