If there's killing in the works, I want killing done; no free rides.

As a cinematographer, Jack Cardiff shot some of the most stunning works in the history of cinema — including Black Narcissus and The Red Shoes. Although the films in Cardiff's run as a director in the 1960s and 1970s tended to be less glamorous, his pulpy 1968 war adventure Dark of the Sun has its share of striking, if unpolished, images, as well as a touch of thematic residue from the loftier pictures in his background.

Rod Taylor stars in Dark of the Sun (a.k.a. The Mercenaries) as Capt. Bruce Curry, a soldier-for-hire working for Ubi, the beleaguered president of war-torn Congo. With U.N. forces limiting travel in the face of murderous rebel attacks, Ubi orders Curry to commandeer a train and rescue a load of stranded Europeans, as well as $50 million in diamonds, from a remote outpost in hostile territory. Curry's American-educated Congolese right-hand man, Ruffo (Jim Brown), joins the mission, along with a drunk doctor (Kenneth More) and 40 soldiers under the leadership of a shifty former Nazi (Peter Carsten).

Dark of the Sun has a number of thrilling scenes — including an absurd chainsaw attack — and Cardiff makes the most of the apparently low budget by digging into its more sensational aspects with gusto, resulting in some ambitiously grim and violent set-pieces. Taylor's enthusiastic swagger is disarming, while Brown is effortlessly charming. Yvette Mimieux gives 200% as an initially hysterical widow brought on board following a rebel attack on her home.

When it operates as pure adventure — and macho bromance — there isn't much to find fault with in Dark of the Sun. However, it diverges from that path in ways that, at first, seem half-hearted, but eventually consume the film, giving it an anti-climatic ending that might better suit a different movie. While the screenplay by Quentin Werty (real name: Ranald MacDougall) and Adrien Spies, from Wilbur Smith's novel, takes little interest in the politics of the rebellion, Curry's motives are under constant scrutiny from Ruffo, with no provocation. By the end, Curry, himself, is re-examining his choices, as if a late rash action was somehow a culmination of his behavior throughout the mission.

If Dark of the Sun were made today, it most definitely would have introduced skepticism about Ubi, and painted a more complex (and less-racially problematic) portrait of the anti-colonial rebels, and maybe have given Curry some more obvious demons or flaws of character, providing Ruffo just cause to doubt his reliability; but with none of that context present in Cardiff's movie, Curry's antagonists look like jerks, and the ending gesture — which seems like something out of a serious war drama — really not so dramatic or as meaningful as it's supposed to be. Dark of the Sun seems caught between what it does really well — action, Taylor roaring like a maniac, and Mimieux losing her mind — and an awkwardly unfulfilled desire to be taken seriously.

Interesting to mull over myriad ways #DarkOfTheSun would be different if made today. Socially untenable in many aspects. #PotLuckFilmFest https://t.co/NJIgyijQ6c

#DarkOfTheSun was brought to my #PotLuckFilmFest by Mike Russell. Thanks for the action-packed parade of militant colonial microaggressions! https://t.co/8vRrMsUZP3

Discuss Dark of the Sun @ Letterboxd 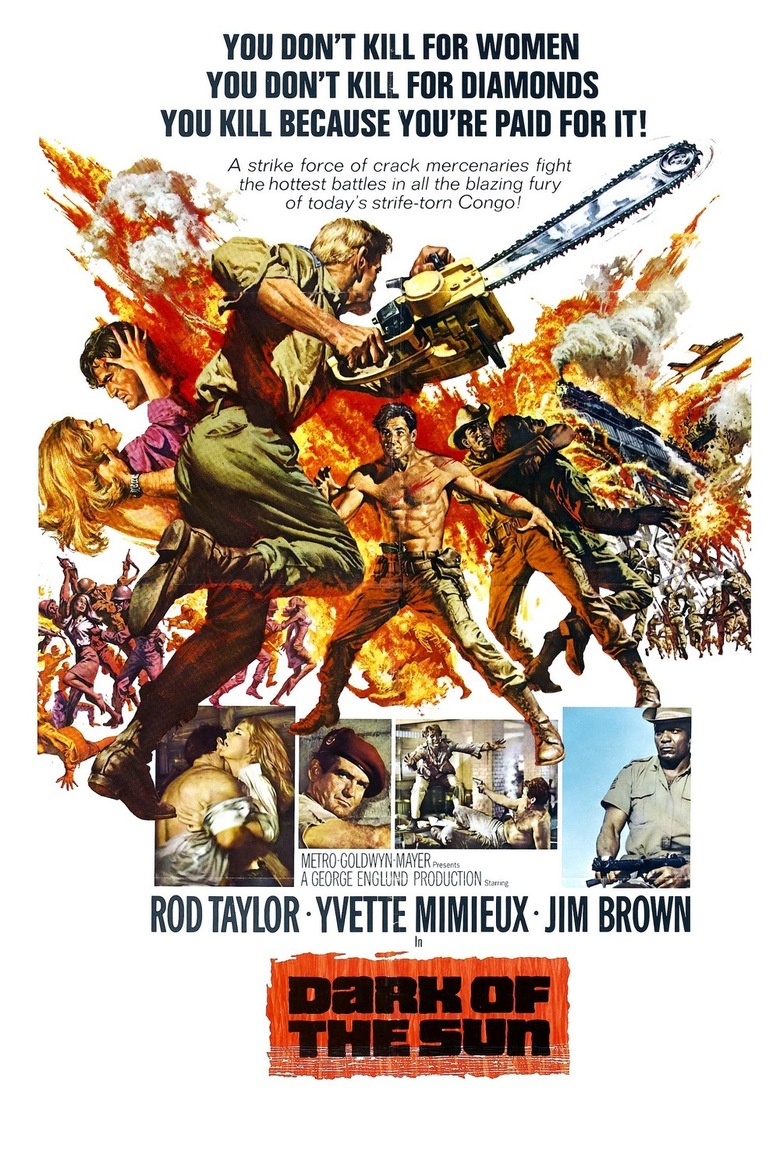