How much is a ton of dreams?

Exiled is my second Johnnie To movie in the last few months, and third overall, and I'm not sure I've figured out how to watch them to find the quality that everyone else talks about. To's unorthodox mix of supposed genre deconstruction, sincere hyper-sentimentality and purely stylistic indulgence feels like the work of a lazy teenager rather than a canny craftsman. Where To's 1999 breakthrough The Mission felt whole, if slight, in its exploration of the mundane flipside to Hong Kong crime tropes, Exiled feels fractured into a thousand pieces cut from different puzzles. Some movies challenge preconceptions by constantly examining their own form and themes; Exiled doesn't feel introspective, just defiantly obtuse, with its greatest assaults aimed broadly at the suspension of disbelief.

Four soldiers (Anthony Wong, Francis Ng, Roy Cheung, Lam Suet) in a crime organization are sent to assassinate an old friend (Nick Cheung), who is returning after years in exile following a failed attempt on the life of their boss (Gordon Lam). After a few rounds of especially ludicrous gunfire, they opt to reunite instead, with the four hitmen joining their colleague on the vindictive crime lord's shitlist. To presents his unconventional mixture of gangster action, precious introspection and thick sentiment in Exiled with the utmost sincerity, as he strains credulity to depict how people will put their lives in immediate peril to nurture their bonds to home, friends and family. Unlike the unbridled operatic emotional carnage of John Woo, To modulates the volume of his drama but is otherwise smitten with most of the same tricks, with a few also borrowed from Hollywood directors like Michael Mann; To's approach doesn't seem vastly different from other Hong Kong action cinema in concept, just in its slight variations of form.

With the treacly sense of nostalgic camaraderie amongst To's criminals, Exiled wants to be The Big Chill of crime dramas — except that Lawrence Kasdan's self-regarding yuppies have believably burrowed themselves into holes of their own self-regard. To's characters are fatalistically stupid as well as astoundingly bad at their jobs; their inexplicable choices only make sense insofar as To needs them to set-up over-stylized and mostly inconsequential (but sometimes clever) action scenes or brooding montages of self-inflicted melancholy. To's themes, as lazily as they are explored here, are mere slivers dwarfed by busy flourishes of GI Joe-level marksmanship, and quirky indulgences such as unhinged doors pirouetting between bullets and cans of Red Bull floating through the air in slo-mo for a pretense of significance.

If there's a master vision behind To's work, I don't see it; Exiled feels like a retread of The Mission's milieu, but with that earlier movie's tight action scenes replaced by sloppy and nearly absurd lapses in spatial and narrative logic.

I haven't figured out how to watch #JohnnieTo movies. #Exiled is absurd yet sincere. Is it one big joke or real sentiment? #PotLuckFilmFest https://t.co/hAVEZzgkR3

Like in #TheMission camaraderie is key, but 1 trick gets old. Added note of futility in Exiled is drowned by indulgences. #PotLuckFilmFest https://t.co/bMuDEszfQ1

In #Exiled gang might as well be coworkers at a bookstore. #JohnnieTo is too beholden to crime genre to deconstruct it. #PotLuckFilmFest https://t.co/EWQsd4mfxL

#Exiled was brought to my #PotLuckFilmFest by Mike Russell https://t.co/1kGIXLoJki Thanks for my 3rd #JohnnieTo but I'm lukewarm at best. https://t.co/JW2DWtGk3A 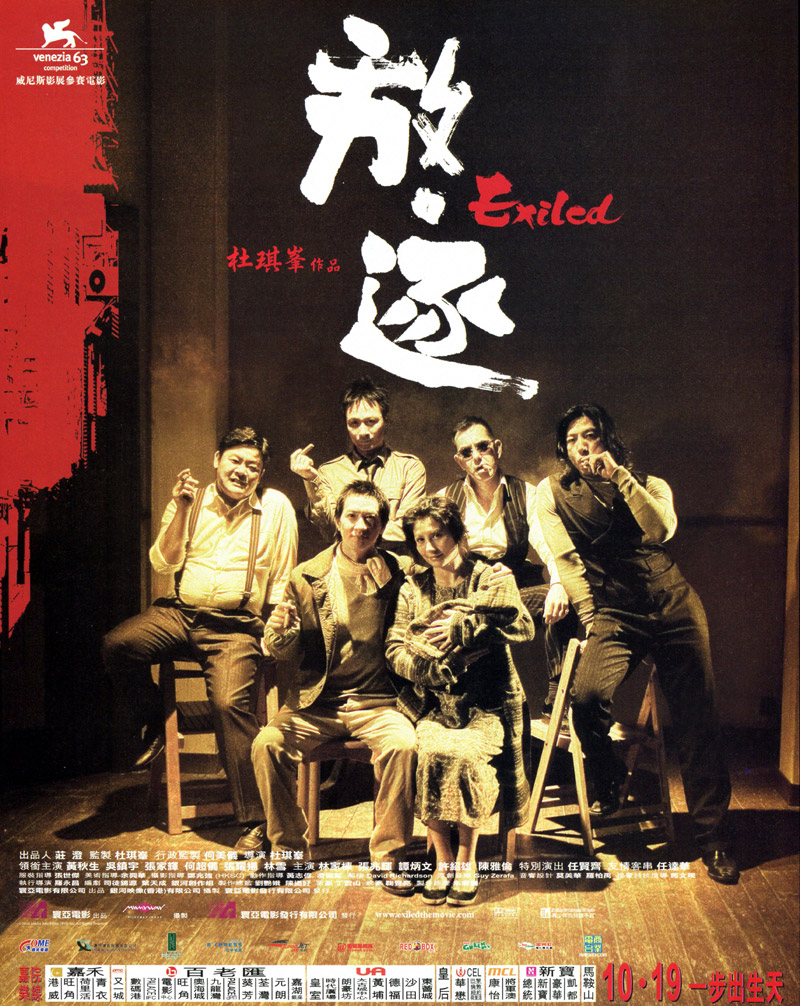