Dope is supposed to be bad, but in a bad, bad world it's good.

Oliver Stone's Savages has a promising premise — forcing fauxhemian SoCal hipster pot artisans through the meat grinder of a ruthless Mexican drug cartel — but plays like an old man trying to blend in at a high school rave, or a cocaine fiend attempting to explain a smooth marijuana high.

Immediately, Savages is torpedoed by possibly the worst narration in the history of film, featuring groan-inducing, irony-free lines like, "I have orgasms. He has wargasms." It could work as smart satire of vapid trust fund dealers, or as high camp, if Stone could pick a consistent tone, but he seems caught between the irreconcilable intentions of serious drama and dark crime comedy. The three principle actors in Savages — Blake Lively, Taylor Kitsch and Aaron Taylor-Johnson — come off horribly, no thanks to their unmoored director. One scene will feature broad writing and underplayed performances; the next a casual conversation awkwardly played big. Even smart actors would struggle with this chaos, and there is never a moment in Savages in which any of those three appears moderately bright as performers. The supporting cast provides some consistency, with Benicio del Toro, Salma Hayek and John Travolta showing their experience by running with the heightened flavor of the material, but even they have very little to work with. Del Toro, in an amusing mullet, coasts through a heavy role that he's played too many times; Travolta looks to be having fun as a shifty DEA agent until Stone saddles him with a late heavy monologue on the deathbed of a character no one has seen before; Hayek has Savages' best moments as an alternately vulnerable and vicious drug queen with daughter issues, but her good material just makes the rest of the movie feel saggy and unfocused.

Near the end of Savages, Stone seems on the verge of changing gears once more, as if the entire movie had been a Spaghetti Western in disguise, but that's before he pulls a simultaneously aggravating and relieving narrative trick that, at least, wipes away what would have been one of the worst endings in recent memory.

Savages is a kinetic mess, with Stone so desperate to keep it snappy that he pulls out his flashy 1990s editing tricks and more soundtrack cues than an episode of The Real World: Malibu — one incongruous musical bump even appears to mock the murder of an innocent bystander — but none of that often misplaced energy conceals the fact that Pineapple Express beat Savages to every punch five years earlier, and with a natural ease that can't be faked.

If #Savages is meant as camp, horrible narration & dialog may be excused -- but 3 key actors can't handle it. #PotLuckFilmFest #OliverStone https://t.co/8AMjujGTJf

#Savages was brought to my #PotLuckFilmFest by Patrick Nachtigall. Thanks for a recent #OliverStone but it's a far cry from #Salvador. https://t.co/IEqRBnvcLL 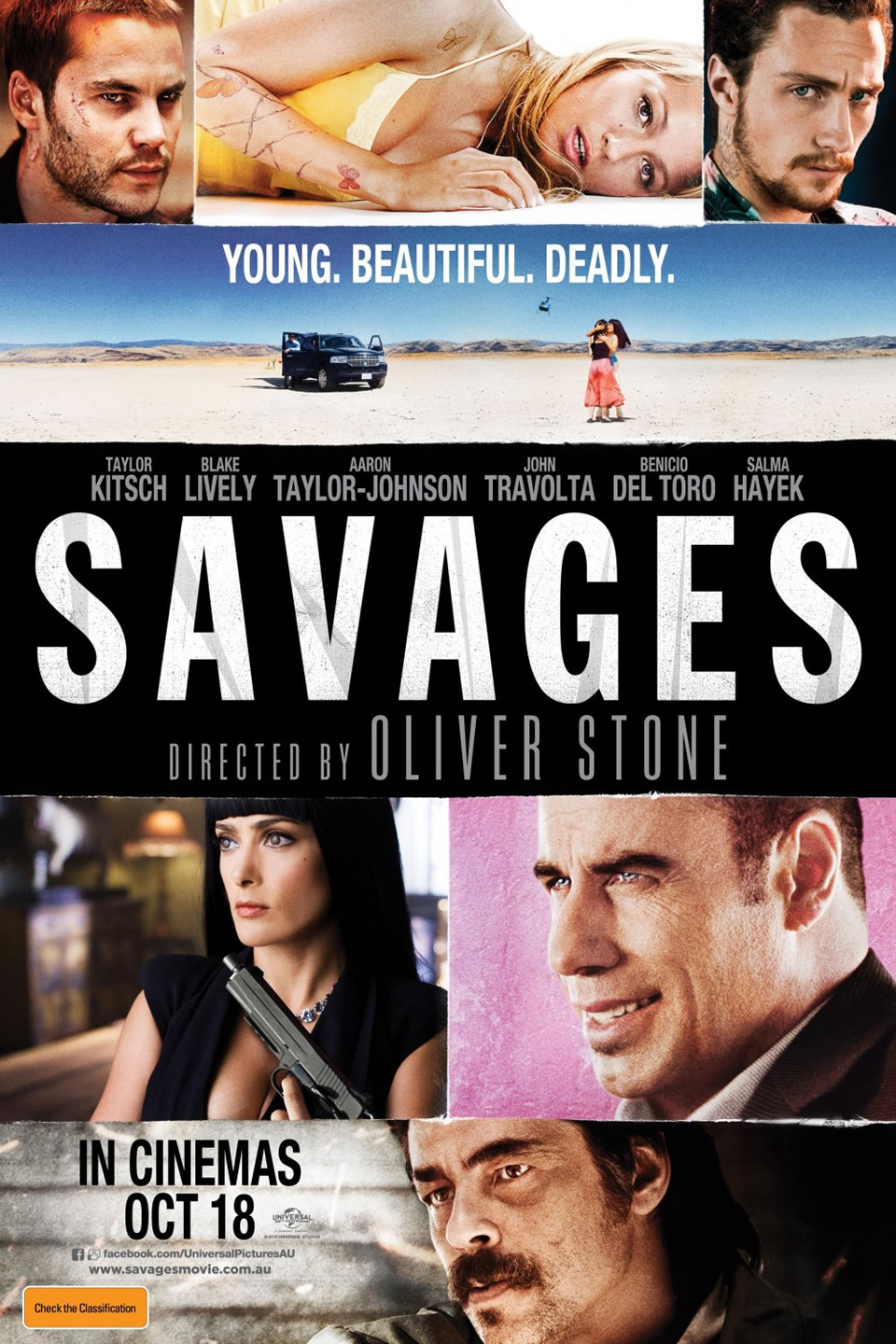