When people talk to each other, they never say what they mean.

History is full of fascinating and tragic tales, and surely the story of math genius and Enigma code-breaker Alan Turing is one of them. Hollywood is full of shallow, overly sentimental and self-satisfyingly didactic treatments of history's compelling chapters, and surely The Imitation Game is one of them. One expects a certain level of ahistoric embellishment in any life-to-screen adaptation — composite characters and events; omission of distracting details; artificial dialog to heighten the drama within scenes — but what The Weinstein Company has done with Turing's life is dispiritingly bland: a hyper-polished and Disneyfied reduction of genius, heroism and sadness into lowest-common-denominator inspirational filmmaking with a cruel twist-ending to remind the audience that they're better people than those who lived decades ago.

Benedict Cumberbatch stars as Turing, a prickly visionary whose code-breaking machine for British Intelligence was crucial in defeating Nazi Germany and laid the foundation for modern computing; later, Turing was convicted of criminalized homosexual activity and chemically castrated, after which he committed suicide. Keira Knightley co-stars as Joan Clarke, a fellow code-breaker who braved sexism to play her role in the code-breaking effort and briefly became Turing's fiancee as a matter of mutual convenience.

With such success and tumult, Turing's life in its barest bones would surely make a compelling subject, but screenwriter Graham Moore and director Morten Tyldum contrive to heighten its emotional resonance by inserting worn-out cliches and fabricated maudlin details that needlessly strain credulity. Moore's screenplay (which was once, unbelievably, on the Black List of the best unproduced scripts, and, finally, won the Oscar for best adaptation) adheres rigidly to tired screenwriting tricks, like introducing annoying mini-conflicts within scenes, each tidily resolved with neat buttons, as if Turing's story without constant and common manufacture would be a total snooze. Oddly, and anemically, Moore never dives in detail into either Turing's work nor his private life — perhaps assuming that the former is too heady and the latter too unseemly for audiences to handle — but offers instead a series of broad, spoon-fed emotional cues engineered, ultimately, to deliver a social message that is rather obvious 70 years later. Aside from some clever material involving the confusing signals people send each other — a form of code at which Turing is less fluent — The Imitation Game is an unnuanced story of tear-jerking bullying and persecution, and none of the real details matter.

Tyldum adds to the artifice of The Imitation Game's script by filming everything through the dewey-eyed lens of an expensive soap opera. Technically, it's all top-notch, as expected of gourmet Oscar-bait, and Cumberbatch does a fine job with what he was given, even if the real Turing was not exactly the near-autistic portrayed here. Knightley has a tougher time with the less-coherent series of movie tics that comprise her character. She gets her over-staged star introduction, lots of winsome flirty smiles, and a few pithy speeches about opportunities for women, but she also seems too eager to quit when the narrative algorithm needs a new mini-conflict, and twice launches into harsh verbal assaults on Turing which come out of nowhere. Although by the end, Jane becomes a conduit for the audience, viewing the injustice of Turing's plight with the clarity of future decades of social progress, up until then she is the conduit for a random screenplay generator.

There's never a moment in The Imitation Game which offers a glimpse of the real Turing, the real Clarke, the real code-breaking, the real inspiration, or the real effort. While diversions from reality are to be expected, a complete reality-transplant in historical movies should be a thing of the past. Many of the inaccuracies in The Imitation Game border on the obnoxious and betray the producers' intentions to cynically oversell their subject. A scene in which the small team of civilian code-breakers take it upon themselves to devise military strategy is laughable on its face, and many other details that reek of overreaching are just that. For example, Turing did not name his machine after his dead first love, and Commander Denniston (Charles Dance) was not cartoonishly and illogically hostile to the efforts of codebreakers. There's even a weird exaggeration in the informational title cards preceding the final credits, which nearly doubles the amount of time that Turing's work for the war effort was kept a government secret, and for what purpose? Such changes denote an overeagerness for "drama" that undermines rather than illuminates the history and the people involved.

By reducing the complex and moving story of Turing's short life to an anti-bullying screed, The Imitation Game is illustrative of the false empathy of smug moralism, which hollows out the individuals it claims to exalt or vindicate into shells that can be shuffled around and posed for maximum effect, reducing their humanity into propaganda. One can only wonder what a more idiosyncratic and delicate director, like Terence Davies, might have made of Turing's story.

History is fascinating & doesn't need to be tarted up w/sentiment like an Olympic athlete TV profile. #TheImitationGame #PotLuckFilmFest https://t.co/UESp4rOSA5

Trailer for The Imitation Game (2014) 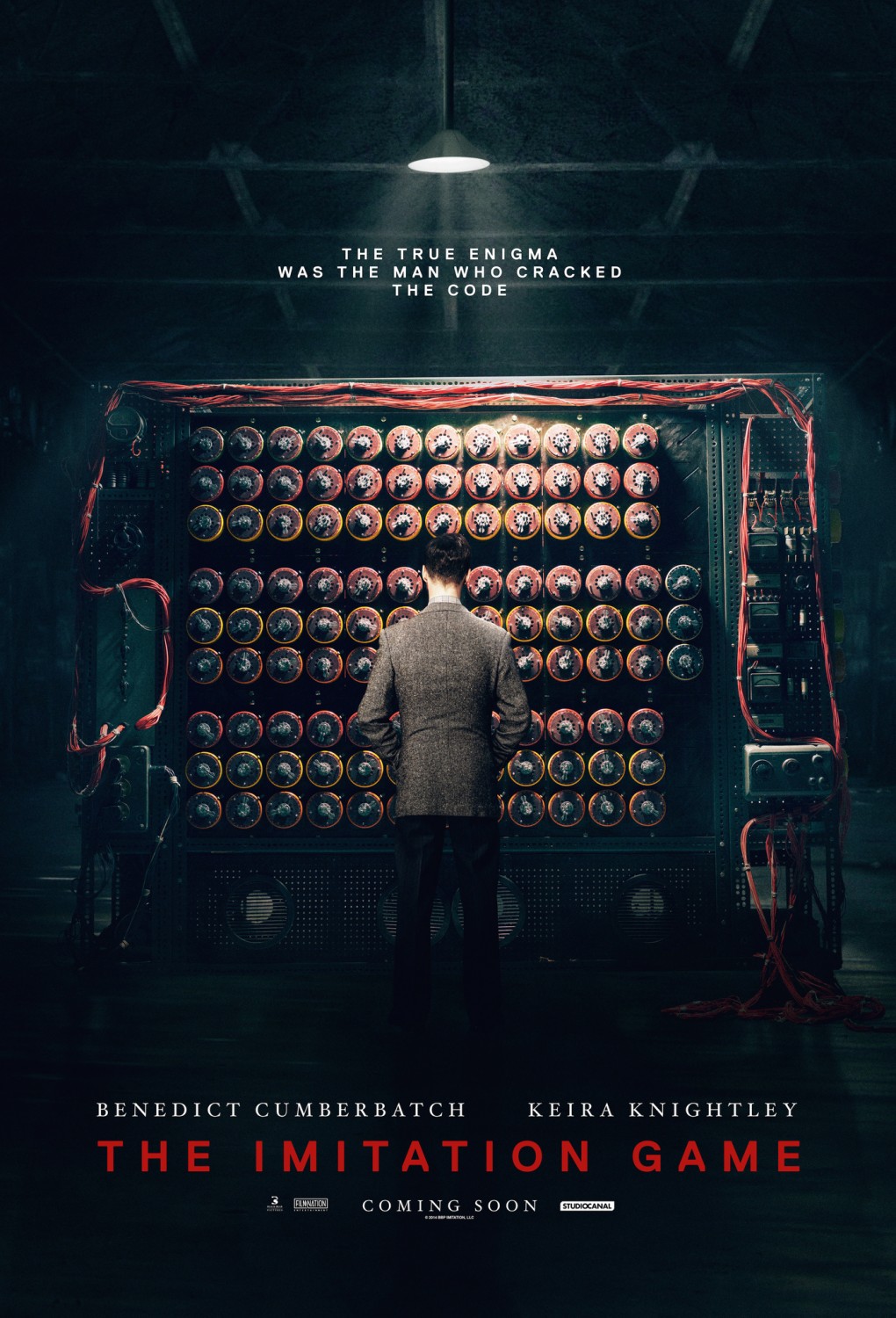