I saw Flash Gordon when it played theatrically, probably in the vicinity of my ninth birthday. What I remember of this experience almost exactly 40 years ago has nothing to do with the movie, as the soccer teammate with whom I attended the cinema that evening got his arm stuck in the folding seat while trying to fetch the Red Vines he dropped. I didn’t go to any more movies with this person. In retrospect, however, it’s hard to imagine such a petty drama distracting a kid from the orgy of PG-rated sex and spectacle that is Mike Hodges’ Flash Gordon, which is eye-catching if nothing else.

In the wake of Star Wars’ explosive success in 1977, it was natural that studios would attempt to turn any available space adventure properties into blockbuster-sized attractions. That George Lucas took inspiration from the pulpy sci-fi fantasies of his youth made the resurrection of Flash Gordon virtually inevitable. The problem with Flash Gordon is that it first appeared as a comic strip and then as a series of short serialized films during the 1930s, neither of which formats set a reliable precedent for the complex narratives or depth of characters required for a feature film following a decade of introspective "Second Golden Age of Hollywood" formal reinvention. Flash Gordon was a throwback in too many ways: pre-NASA, pre-2001: A Space Odyssey, pre-sexual revolution, pre-gritty 1970s ugliness… it was quaint from every angle.

How do you take something as old-timey as Alex Raymond’s story of a square-jawed football hero fighting with hawk-men in outer space and make it appeal to 1980 audiences? Get Hodges, the writer-director of one of the 1970s’ grittiest and most cynical movies, GET CARTER (1971), but have him counter-intuitively lean into the source material’s cornball characterizations and art deco designs, and then counter-counter-intuitively drench everything in disco-era glam and sex. And hire opera-rock superstars Queen to score it. None of it makes sense; it sounds like too many wild stylistic zigs and zags to work, but somehow Flash Gordon survives the ensuing whiplash simply as a spectacle of confounding choices.

Sam J. Jones stars as Flash, an Earthly sports star who, along with beautiful reporter Dale Arden (Melody Anderson) and scientist Dr. Zarkov (Topol), becomes haphazardly entangled in the evil machinations of alien warlord Ming the Merciless (Max von Sydow) of the planet Mongo, who is beset on all sides by treacherous henchmen, adversaries from nearby planets, and his carnally thirsty daughter Aura (Ornella Muti).

While there’s a lot of color in the broad details of the Flash Gordon storyverse, there’s no dimensionality to the plot or characterizations, making it faithful to the spirit of the original comics and serials but completely uninteresting as a standalone narrative. However, the combination of Flash Gordon’s cultural legacy and Hodges’ unholy anachronistic color orgasm of ambitious production design, aggressively sparkly costumes, half-terrible special effects, and repetitive use of a few short Queen hooks over and over is sort of mesmerizing. The fetching discombobulation of Flash Gordon is maybe even more effective today, 40 years after its release, now that its antiquated effects (which weren’t even up to the standards of the late 1970s) are as pleasingly retro as the original Flash Gordon was to the 1970s. Some moments, like the shots of Vultan's army of hawk-men hovering in wait for the climactic battle, look now like an homage to the hypnotic rudimentary animated GIFs of early website design. Flash Gordon has a lot in common with another 1980 spectacle of wayward ideas, Menahem Golan’s futuristic musical THE APPLE. There is something visually arresting (and often bewildering) in every single scene, ably distracting from the paucity of substance.

With such an oversaturation of diversions, it’s a bit surprising to find that, underneath all of the glittery noise, Flash Gordon’s cardboard characters become a little bit endearing by the end of it all. None of the actors acknowledge the campiness of the project and commit earnestly to their assigned one-note performances. Jones’ and Anderson’s simple wholesomeness effectively contrasts with their zany surroundings, while von Sydow, Muti, Brian Blessed, and Timothy Dalton play it relatively cool against their big conceptualizations (Topol, on the other hand, is incapable of playing "small"). For an unadventurous tale of fish-out-water in a battle of good vs. evil, Flash Gordon is just satisfying enough to anchor all of the impressively crazy showmanship.

Flash Gordon (1980) scores another win for David Anderson’s list of Flickchart’s top-ranking "Space Adventure Movies of the 1980s," coming into my Flickchart at #2260 (55.68%). Sadly, this means that I must move on to the dreaded next movie on this list, one that I hoped to never watch, The Transformers: The Movie (1986), directed by Nelson Shin. Sigh. 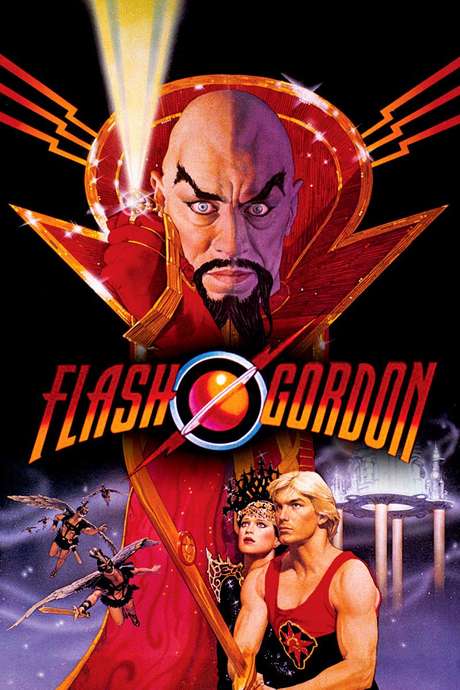 More about Flash Gordon (1980) on Videopolis