One of the most drastic changes normalized during the "New Hollywood" era was a stripping away of some forms of artifice and melodrama from the studio era. While artifice and melodrama can be terrific in their own ways, so can earthy naturalism, and as filmmakers felt freer to explore unconventional narratives in tones reflecting a form of reality over fantasy, many emotional cues that had become cliches over the previous decades became replaced by new, fresher ideas. Of course, 50 years later, many of "New Hollywood’s" innovations have also become cliches. In some ways, the low-key textures of Sydney Pollack's Jeremiah Johnson (1972), a western starring Robert Redford as a 19th-century mountain man, fits in so well with 2021’s post-digital independent cinema that it might take a little work by today’s audience to appreciate just what a departure it was from the style of American westerns that were being produced in Hollywood just five years earlier.

Looking for a change of pace following the American-Indian Wars, soldier Johnson sets out on his own into the Rocky Mountains and — with a lot of trial, a little help, and a lot of error — learns how to survive and live as a fur trader. Based on biographies of a real-life figure, Jeremiah Johnson is episodic mood-filmmaking, including long stretches of quiet reflecting Johnson’s solitude. Cinematographer Duke Callaghan captures the harsh messiness of pre-modern mountain life, and, like the rest of Pollack’s approach to the material, allows the grandeur of the locations to linger evocatively in the background without dwelling on them in the most obvious manner. This is a world in which the natural beauty of the backdrop is no match for the immediate demands of living in it, an experience that traumatizes (or worse) those who aren't hardened by its relentless hardships.

Jeremiah Johnson has a simplistic narrative (sometimes the lesson to be learned is, "If you meet a man buried up to neck in sand, leave him there"), anchored as it is to one man’s external experiences, and while Redford is one of the best of his generation at subtly expressing internal monologues with a dart of the eyes (or a meme-able zoom in on a fixed stare), the movie at times threatens to linger too long on single notes. Its contemplative nature, while relatively fresh, still comes a year after the even more challenging experiment in naturalist genre revisionism, Robert Altman’s McCabe & Mrs. Miller (1971), and, in comparison, Jeremiah Johnson is a much softer and almost Disney-adjacent look at frontier life (even the fine songs on the Jeremiah Johnson soundtrack feel like gentle revisions of Leonard Cohen's better, haunting McCabe soundtrack). It’s a little jarring when Jeremiah Johnson turns for its final act into a genre-adjacent revenge story, introducing a sudden surge of plot and action. This shift works in the way that sudden jolts of tonal discord also became a reliable feature of “New Hollywood” filmmaking, and Pollack’s approach to action montage is unconventional enough to distinguish itself despite any uneasiness in the transition. Even with its grim eventualities, Jeremiah Johnson is a soft-edged, family-friendly version of "New Hollywood's" narrative and stylistic innovations, and pretty good within those atypical limitations. 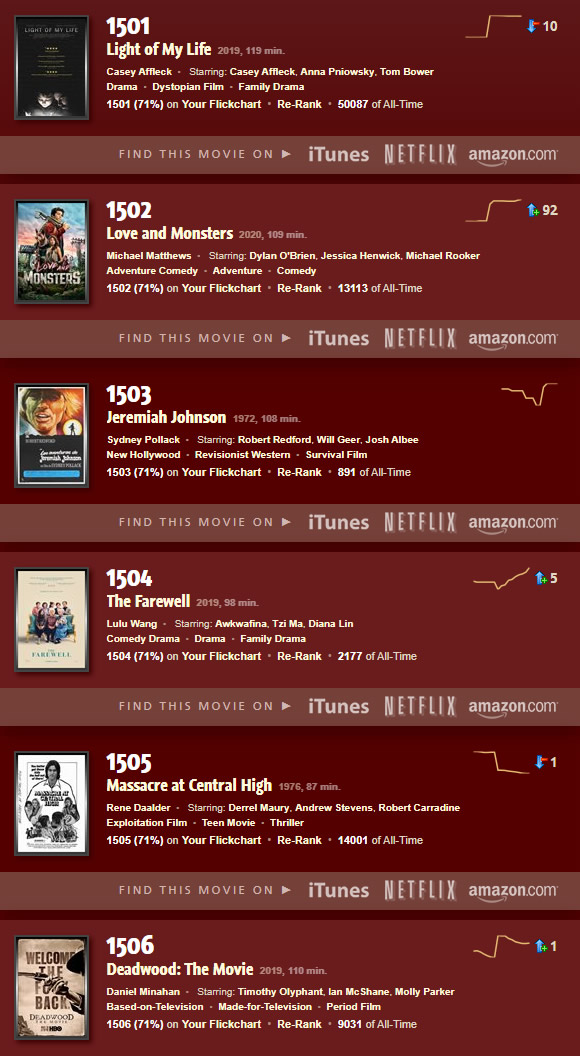 Another win for Greg Dean Schmitz’s "New Hollywood" list, with Jeremiah Johnson (1972) ranking at #1503 (70.66%) on my Flickchart. This earns Greg another FREE PASS to be used in the Second Round. Coming up next from this list is a movie my tender sensibilities have been dreading for decades, the foreign prison torture drama Midnight Express (1978), directed by Alan Parker. 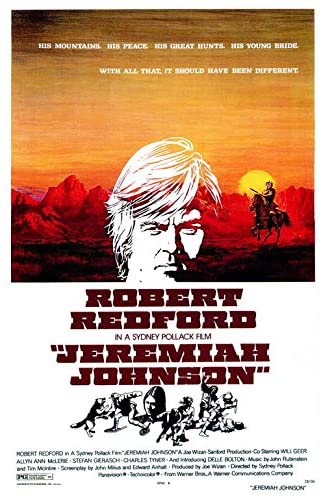 More about Jeremiah Johnson (1972) on Videopolis