I have very mainstream movie tastes. It’s a fact; my list of “the best movies ever” is saturated with conventional titles about which there is some mainstream consensus regarding their overall quality. My interest in exploring the more obscure corners of high art and low exploitation tends to hit the same obstacle from opposite directions: I want a solid, well-conceived, and careful core in a movie, and then a bunch of weird or beautiful or exciting or insightful shit on top. If that solid core isn’t there — a plot that makes sense, with characters who feel “true” and have explicable motivations — I can struggle to accept the creative flourishes that make a movie unique. [I’m writing this review on the same day as a negative review of Tarkovsky’s Ivan’s Childhood (1962), which was frustrating, and has riled my mainstream resolve more than usual.]

When I watch something like Long Weekend (1978) — a minor masterpiece of dread from director Colin Eggleston and screenwriter Everett De Roche (remember him from Razorback (1984), one review ago?) — I tend to get hung up on foundational issues — like: “Why is this even happening?” — even though I know full well that those questions are tangential, at best, to the interests of the creators. They are going for a visceral experience, and maybe even something subconscious, and what happens in the rational space between is of little matter.

Long Weekend stars John Hargreaves and Briony Behets as Peter and Marcia, a couple whose marriage is on the rocks, or maybe even far past the rocks. To give you an idea of just how strained this relationship has become, the first time we see them together, Peter is aiming a rifle at Marcia’s face. He doesn’t shoot her. Instead, like all couples who can barely stand each other’s company do, they go away for a weekend camp-out together. If they thought their personal strife was their biggest problem, they have no idea what nature has set in store for them.

During the course of three nights and days, Peter and Marcia are beset by unnerving events, which include getting lost more than once and several hostile encounters with wildlife, and just what happened to the neighboring campsite? The sense of doom surrounding the entire trip starts on the road, is fertilized by their irreconcilable differences, and spirals downward. Long Weekend is part of the eco-horror craze that emerged in the 1970s — in titles like Bay of Blood (1973), Bug (1975), Frogs (1972), The Prophecy (1979), and fellow Ozploitation cult classic The Last Wave (1977) — in which the forces of nature rise up against humans who have been wasteful stewards of Earth’s bountiful resources. This is most pointedly depicted in Long Weekend through Peter, who chops at a tree with his ax for no reason, and shoots at ducks and other wildlife as if they are props in a macho fantasy. I’m more interested, however, in how Long Weekend is a part of another, less-often categorized subgenre: Relationship Horror. Like Rosemary’s Baby (1968) and Possession (1982), Long Weekend is another exploration of family-and-marriage anxieties manifesting in physical and supernatural horrors.

Is Long Weekend the best it could be? Not to my mainstream-hungry rational brain. The trip itself is inexplicable, except as the folly of a particularly obtuse Australian man, and the level of tension that Egglestone achieves is greater than the sum of the narrative’s parts — a beached bunyip who cries like a human baby is not in the least threatening, but, boy, is it eerie. Both the eco-horror and family dysfunction angles are partially baked and somewhat unsatisfying, more set-up than climax. Yet, there’s something about the way Egglestone casually paces Long Weekend, in conjunction with Vincent Monton’s ruminating cinematography, that makes it work on a level of surreal desperation. There’s some more disappointment in how Long Weekend nears its conclusion, stretching some redundant and generic material that is not as effective as its build-up, but it’s still got some nice shocks in store, and it leaves the right final impression of inescapable doom — if you can let the visceral impact of it cloud out any rational nitpicking. 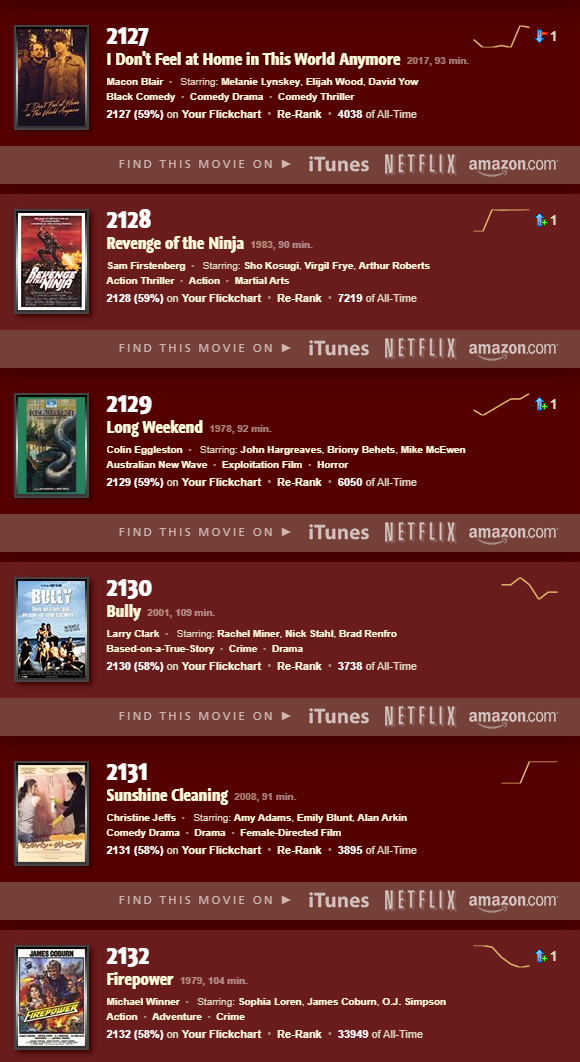 Long Weekend (1978) continues the modest success of Nick Dallas' list of Flickchart's Top Ozploitation movies, ranking at #2129 (58.59%) on my Flickchart. That makes for two positive reviews, and yet not enough yet for a FREE PASS to the Second Round. Up next in this chapter of the Silver Screen Streak Movie Challenge: a slice of the Ozploitation revival of the mid-2000s, the animal-attack picture Rogue (2007), from Wolf Creek (2005) director Greg Mclean. 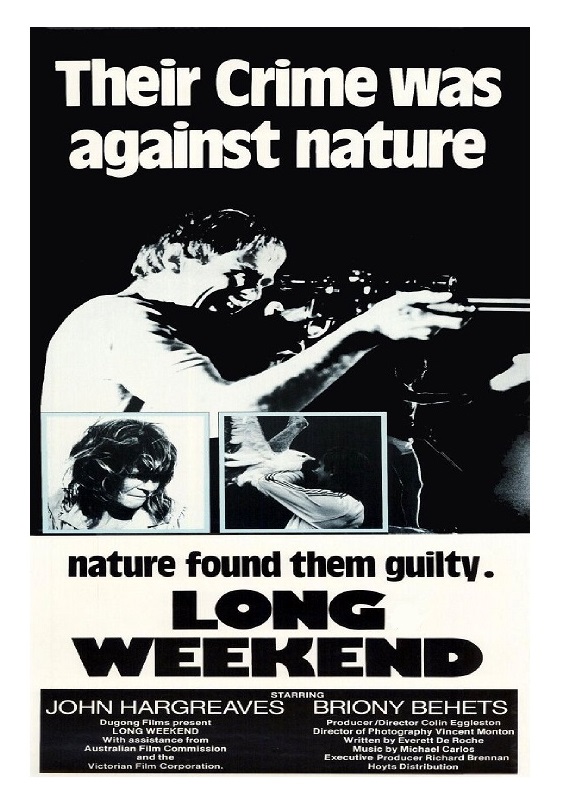 More about Long Weekend (1978) on Videopolis