Due to its silly-sounding title and PG-rating, I’ve always dismissed The Cars That Ate Paris (1974) as a frivolous movie not worth considering, something like a cross between the family-oriented The Fish that Saved Pittsburgh (1979) and a one-joke cheapie like Attack of the Killer Tomatoes (1978). That it was the feature debut of Peter Weir, who became, over the next decade, the accomplished director of contemplative movies such as Picnic at Hanging Rock (1975), Gallipoli (1981), and Witness (1985), probably should’ve caused me to take it more seriously. It is, it turns out, a compellingly strange entry in Ozploitation’s fixation on Australian do-it-yourself car culture, and one that, like Picnic at Hanging Rock, creates an elusive sense of mystery by resisting easy explanation.

In depressed rural New South Wales, an automobile wreck takes the life of one of a pair of itinerant worker brothers, leaving the survivor, Arthur (Terry Camilleri), convalescing in the strange little village of Paris, where the citizens have a bizarre relationship with cars and road accidents. The Cars That Ate Paris may sound like an obvious high-concept sci-fi horror gimmick, but Weir and co-writers Keith Gow and Piers Davies take the least obvious road. While there are suggestions of supernatural phenomena at work in Paris, class conflict seems to be a more propulsive driver of the town’s peculiar malaise. Weir also seems concerned with the political and economic exploitation of tragedy, and hints at an unholy human obsession with commercialism and destruction, as well as a kind of cannibalistic desire to re-engineer anything at hand, human or mechanical — but he never veers into explicit messaging, smartly frustrating any sense of resolution or satisfaction. Weir isn't proposing a contrived conflict to be solved in the final act, but merely exposing a world and its wreckage. The ease with which Weir lets so many alluring and conflicting threads dangle in the breeze creates an uneasy sense of uncertainty and surrender. By extrapolating from the fictional name of the town (and some other perhaps unintentional clues), one can even stretch to read-in hints of France’s Vichy government weakly and opportunistically colluding with malevolent forces that they do not fully understand and cannot control. This openness to interpretation is one of the most beguiling features of a movie that is, otherwise, pleasingly wry and unassumingly quirky.

The Cars That Ate Paris is aesthetically assured, despite its meager means, beginning with a grippingly arch opening sequence that parodies the glib glamour of lifestyle advertising. Weir is a terrific framer of unsettling shots and, along with cinematographer John McLean, gets the most out of limited resources and the seemingly never-ending cinematic gift of Australia's natural desolation. The makeshift production design, which includes the spike-covered Volkswagon Bug that dominates the movie’s marketing, ably evokes the ramshackle and impoverished but ingenious gear-head ethic of the culture's car fetish as well as does George Miller’s iconic 1979 thriller Mad Max. 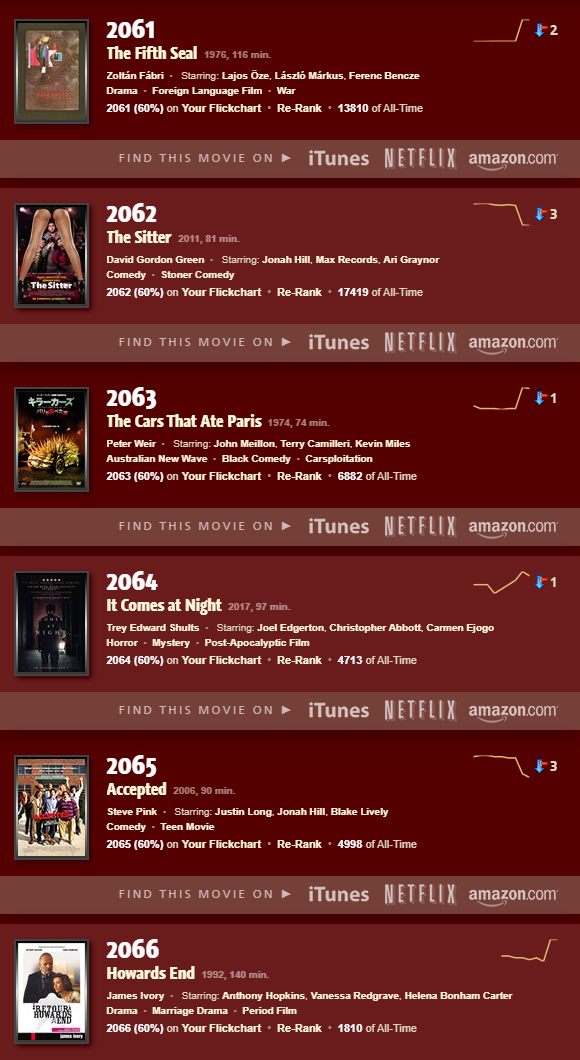 The Cars that Ate Paris keeps the Ozploitation streak going with a rank of #2063 (59.95%) my Flickchart. This puts Nick Dallas’ list among the longest First Round streaks so far (joining Bas van Stratum’s iCM Forum’s 500<400 and Stephen Roney’s Humphrey Bogart’s Filmography lists at five movies). Only Dan Kocher’s custom list, so far, has made it to six movies, and Nick’s list shares with Dan the dubious accomplishment of failing yet to earn any FREE PASSES to Round Two. Will the next pick from Flickchart's Top Ozploitation movies — Richard Franklin’s meme-able horror schlockfest Patrick (1978) — be the one to change Nick’s fortunes for good or ill? 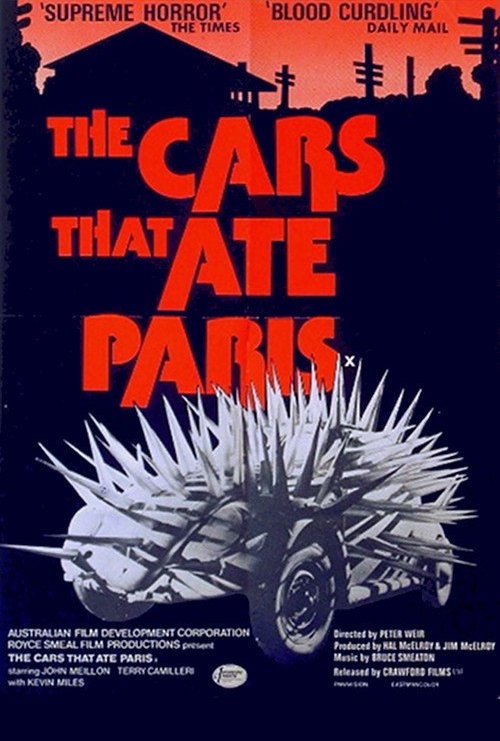 More about The Cars That Ate Paris (1974) on Videopolis