Home from the Hill (1960) is a big Hollywood melodrama from the same tradition as Peyton Place (1957), A Place in the Sun (1951), and the James Dean classics East of Eden (1952) and Giant (1956). All of these movies address, on a broad canvas, an array of class-informed character types, mildly spicy social issues, and soapy plot elements, yet Home from the Hill doesn’t seem to have achieved the same iconic status as the others. Without the added allure of a classic novel as its source material, or a spin-off TV series, or iconic heartthrobs on the level of James Dean or Elizabeth Taylor, Home from the Hill has rather slipped into obscurity despite its comparable quality as a satisfying prestige picture.

While Robert Mitchum and Eleanor Parker headline the cast of Home from the Hill, it’s really the story of their legacy, in the forms of George Hamilton, who plays their emotional teenage son Theron, and George Peppard, as the son-like ranch hand who represents something closer to the masculine ideal of their Texan game-hunting lifestyle. All of the familiar tropes are present: the struggle for respect between a powerful withholding father and a spoiled son, the bitter secrets of a loveless marriage maintained for social appearance, the wreckage of careless young love; the confusing fluidity of class lines when high society and rural machismo coexist within such close quarters; and how the echoes of vice reverberate down through the generations.

With accomplished Hollywood director Vincente Minnelli in charge, and working from a script by Harriet Frank Jr. and Irving Ravetch (whose loose adaptation of William Humphrey’s novel was not welcomed by the author), Home from the Hill hits pretty much all of its targets, except for the longevity enjoyed by its enduring peers. Minnelli gives it the same grand treatment as other popular Southern-inflected epics of American family and class dysfunction, but he takes care to focus on the intimate conflicts which provide the movie’s emotional core. In addition to that solid story anchor, Home from the Hill includes lively hunting sequences, a cozy sense of its rustic milieu, and some effective low-key narrative foreshadowing that adds to the potency of its themes.

Mitchum is a perfect choice to embody the unflinching amoral opportunism of Capt. Wade Hunnicutt, but, while commanding, it’s the least dynamic character in the film. Parker, who is best known for her later role as the Baroness in The Sound of Music (1965), is also solid as his emotionally estranged wife who becomes jealous over his new influence on their boy. But Home from the Hill belongs to the younger cast members, particularly the two Georges. Hamilton eerily resembles Anthony Perkins, but with Perkins’ nervousness suppressed beneath a slicker rich-boy cool; he’s effective in a role that isn’t meant to be likable. Peppard, on the other hand, is revelatory: rough and sensitive and funny and complicated; it should have been a star-making performance. Also quite appealing is Luana Patten as the girl who catches Theron’s eye, but the role failed to parlay her success as a child actress (notably in Disney’s Song of the South (1946)) into a lasting adult career. 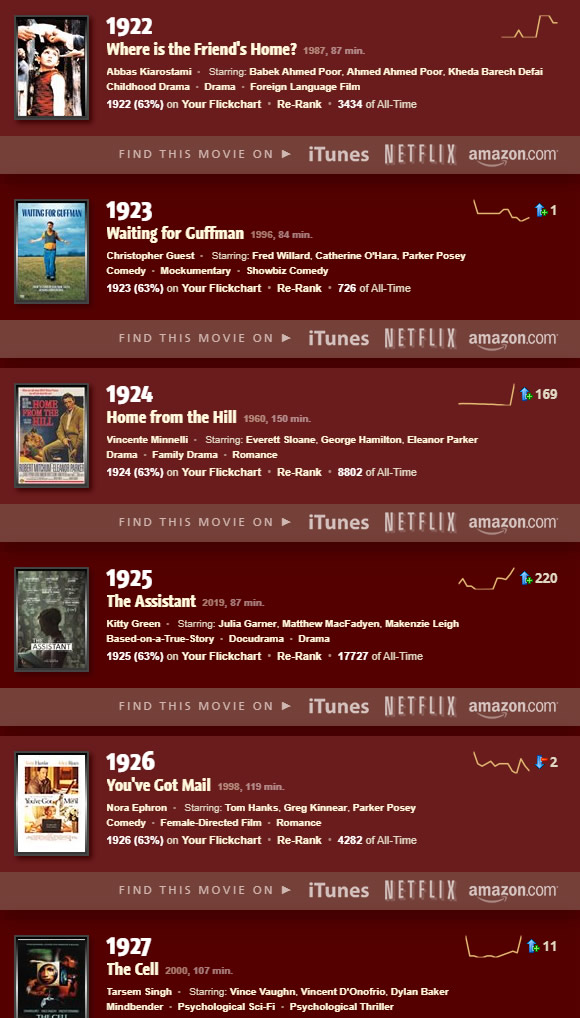 Home from the Hill (1960) improves on the good start for Rob Tabor’s list of Robert Mitchum’s Filmography by landing on my Flickchart at #1923 (62.97%), just enough to earn Rob a FREE PASS for the Second Round. Next up is one of Mitchum’s final films, Jim Jarmusch’s western Dead Man (1995). 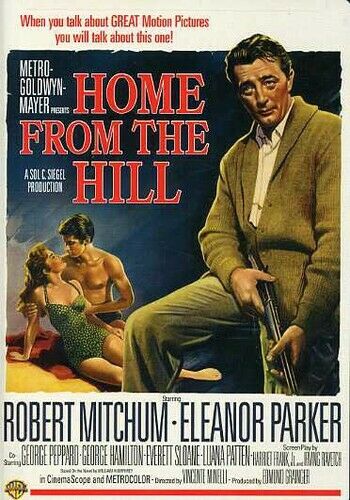 More about Home from the Hill (1960) on Videopolis