Vampires are one of the creakiest subjects in horror, laden in tropes that persist in rising from the grave. Credit to first-time director Rod Hardy and second-and-last-time screenwriter John Pinkney for putting a new spin on the genre, pulling in the 1970s trends of New-Agey sci-fi and paranoid psychological thrillers. These unusual flavors turn their vampire movie Thirst (1979) into an unexpectedly refreshing surprise for about an hour, until its uninspired final act undoes the intriguing set-up with a bland and muddled climax.

Chantal Contouri stars as Kate, an independent businesswoman who is targeted by a modern vampire cult as the last living descendant of famed blood-bather Elizabeth Báthory. Eager to unite Kate with the heir of another famed undead bloodline, cult leaders Max Phipps, David Hemmings, Shirley Cameron, and Henry Silva hold her prisoner at their compound — a mix between a chi-chi spa and blood "dairy" — and try various unethical methods to persuade her that vampirism is the super-race of the future.

Thirst is a mostly high-quality production, with solid performances (although Silva is misused), fine camera work from Vince Monton (whose work we saw earlier in The Long Weekend (1978)), and another nice score from Queen guitarist Brian May (who also scored Patrick (1978)). Where it consistently runs into trouble, however, is Pinkney’s script, which scrimps on character and barely bothers to muster an ending. It might be interesting to read the prolific author’s novel, released the same year as the film, as the film’s problems are common to poor adaptations which attempt to simplify their source material.

As appealing as Contouri is in the lead role, Kate is barely a character. As the narrative situation requires her to be stripped of her will for most of Thirst, some additional context to make her a victim worth investing in is badly needed, but none is offered. The cult’s motivation is also half-baked. There’s never a real notion of what end is served by their nefarious obsession with getting Kate to vamp out, and it nevertheless fizzles when Hardy and Pinkney choose to ride it out, incongruously, as an action movie with absurd stunts that would feel much more at home in something campier, like Brian Trenchard-Smith’s Turkey Shoot (1982). And both what happens at the very end and what it means are anyone’s guess; it makes for a weak surprise twist when the motivating logic and action behind the twist are inexplicable.

There are some fun Ozploitation connections in Thirst — the guy from Patrick gets to walk around for once, and the guy from Felicity (1978) has a considerably worse love life; plus it’s the second movie in a row in this list that begins with a close-up of an eyeball — and the broad concepts are enticing, but the weak main character and ultimate lack of story pay-off are big bummers. 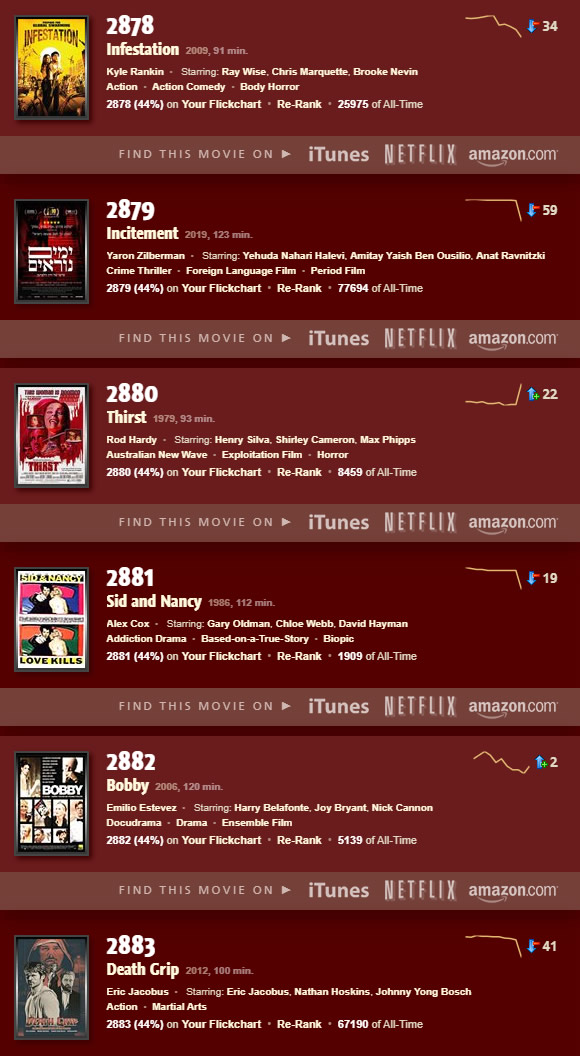 So Thirst (1979) ends my initial streak through Nick Dallas’ list of Flickchart's Top Ozploitation movies with a just-short rank of #2880 (44.32%) on my Flickchart. It's still the most successful First Round streak to-date, not only reaching six straight wins, but even earning one FREE PASS in the process, which guarantees I will get back to this list for at least one more movie in Round Two. For now, I will move on to Rob Tabor’s choice of Robert Mitchum’s Filmography (ordered by average ratings at Letterboxd); overview coming soon. 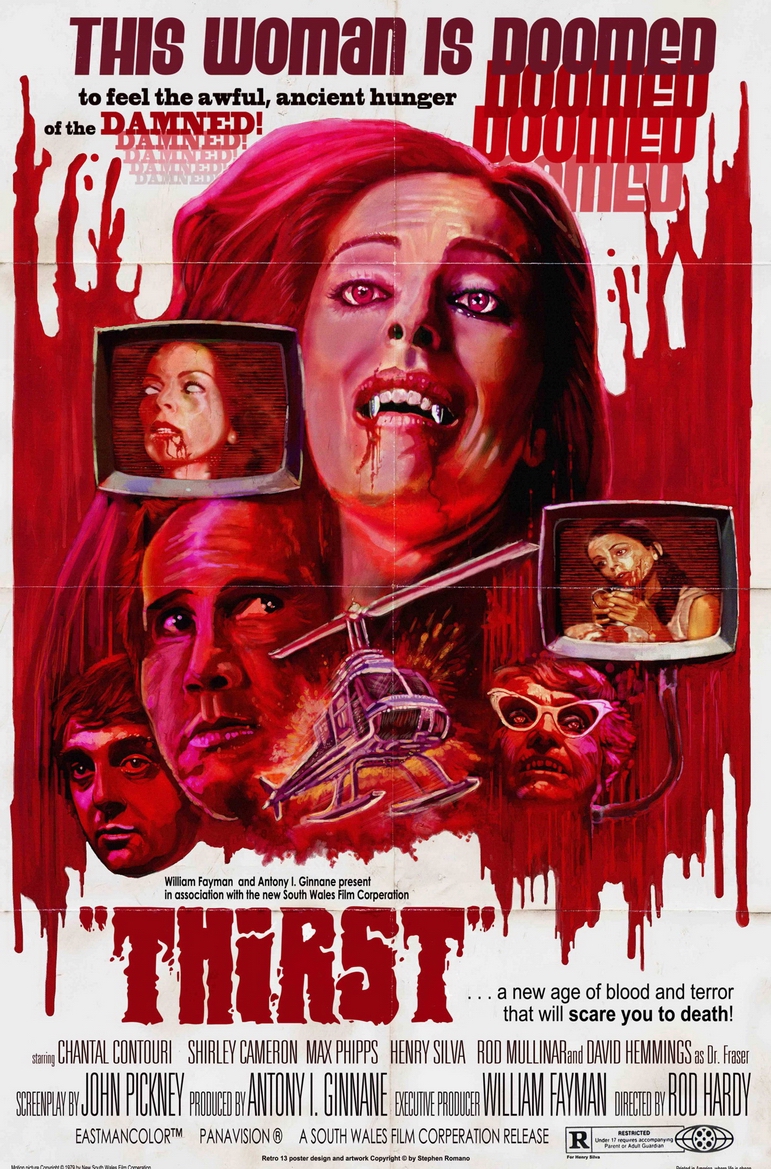 More about Thirst (1979) on Videopolis